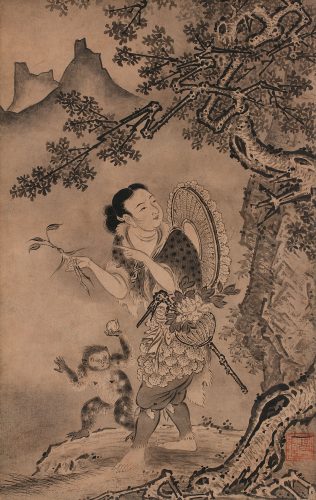 A comely female accompanied by a monkey walks on a path by rock cliff and beneath overhanging pine. Wearing an animal-skin shawl and plaited-leaf skirt, she has a bamboo-hat at her back and a woven basket of flowers hanging at her waist along with a knotted walking stick. She points to an herb held in her right hand, probably ginseng or another plant with the potency to ensure long life. The peach held by her monkey companion was said to have been stolen from the peach-garden of Hsi-wang Mu, Queen Mother of the West, and to confer immortality on all who partake of its necture.

The figure is surely Taoist but the pictorial clues are not precise in their implications. Ho Hsien-k u was one of the Eight Immortals of Taoism—the only female and one characterized as being beautiful, as here—who often holds the peach of immortality, but she is not associated with a monkey or with ginseng, only the lotus-blossom. A Chinese version (fig. 1), a 10th-11th century Liao dynasty painting recovered from an excavation, has a very similar figure holding mushrooms of longevity but the subject has been identified by Chinese scholars as the mythical early emperor Shen-nung gathering herbs. The Immortal Ma-ku lived as a hermit in the mountains and she is another possibility for the subject of the present painting (fig. 2). The indication of hair around her ankles suggests that the figure could be Mao-nu or Mojo, ‘The Hairy Lady,’ a concept that is not found in China and seems to have originated in Japan during the Muromachi era, based on Chinese images of figures wearing fringed leggings (fig. 3).

The present painting is in fact one of a pair (fig.4), the other formerly in the Umezawa Memorial Museum. That figure too wears an animal-skin shawl and plaited-leaf skirt and carries a woven basket of flowers. The mushroom in her hand and the deer beside her are well-known symbols of longevity as are the pine and rocks of her environment. When published by Matsushita in 1960 the two figures were identified simply as immortals, while in the Kanto Sibokuga exhibition catalogue they are both called Ma-ku. Whatever the exact identification of the present figure, her message of longevity is very clear, making the painting a most appropriate and attractive gift for someone’s birthday.

Little is known of the life of Koboku save for a few references in the Koga Biko. He is said to have followed the style of Chuan Shinko (active ca. 1444-1457), a monk who lived in Kencho- ji in Kamakura and was the teacher of Shokei (active ca. 1478-1506). Koboku’s paintings are said to reflect the influence of Shokei and also of that master’s pupil, Koetsu (late 15th-early 16th century), who may have been Koboku’s teacher. Koboku thus most likely lived in Kamakura and was active during the first part of the 16th century. A screen in the Powers collection demonstrates Koboku’s creative manipulation of the classic styles of Sesshu and Kei Shoki (fig. 5). 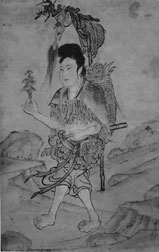