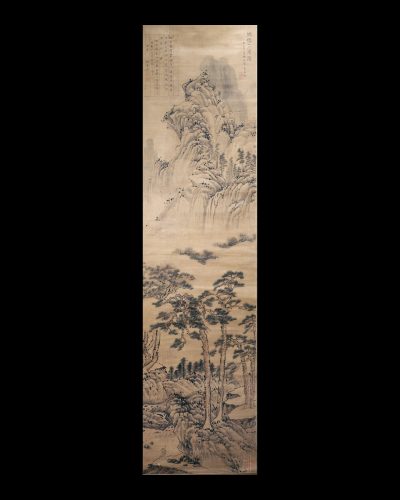 “Traveler with Staff in Landscape” 1777
松溪山水圖

Colophon:
“A temple in pines appears in distant clouds,
floating in the blue-green mist;
A water-course in Spring
flows around the temple.
I suspect this ghee (of the highest stage of Enlightenment),
Is part of Vulture Peak (where the Buddha preached);
Entering this heaven Sweet Dew
fills the fragrant shore.
This was written in response to a request from The Master of the Suishin Studio (Kan Ten-ju) that I inscribe this again beneath a window the Fuyo Study. During the third lunar month of the year 1781 in the Tenmei era, Gen Mohyo from Kai (now Yamanashi prefecture).” Seals: Mo; hyo; Inryo-en shoga zo no in; Kantan –kyo

Oshima Mohyo (1722-1784) was born the son of a doctor in Takanashi Village in Yamanashi district. Moving to Kyoto he began his study of Chinese culture, giving up his original surname of Oshima and adopting the Chinese surname of Gao, pronounced Ko in Japanese. Although remembered today primarily as an artist, Fuyo clearly intended to become a scholar, and he did serve various clans in that capacity.

While living in Kyoto Fuyo came to know and become friends with such literati scholars and artists as Hyakusen (1698-1753), Kimura Kenkado, and, especially, Ike Taiga (1723-1776) and Yanagisawa Kien (1706-1758). In addition to his skill in painting and calligraphy, Fuyo came to be known as “the sage of seal-carving,” in which art he made great contributions to Edo-period culture.

Fuyo’s “Traveler with Staff” was painted in 1777, one year after the death of Taiga, and was done in emulation of the style of Zhang Ruitu (1570-1641), a major artist of the late Ming era in China. Fuyo’s creative transformation of that style resulted in a work of far stronger formal clarity and abstract patternization than would have characterized the original, and it is precisely in those features that Fuyo’s originality can be found. The satin ground of the painting also contributes subtle nuance to the aesthetic impact of the image, since the ink soaks into the surface and slightly diffuses, softening the lines.

Ko Fuyo painted rather few landscapes, and fewer still those with such complex composition and careful execution as the present work. The probable original recipient, who a few years later requested a colophon from the artist, was Kan Tenju (d. 1795), a close friend who was also a painter, seal-carver, and pupil of Ike Taiga. The close relationship of Fuyo and Tanju undoubtedly inspired the artist to this creative height.