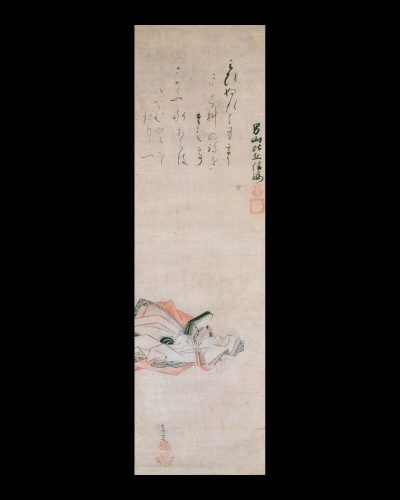 Colophon by Shinkai (1613-1678):
“I have been lonely and miss you, like a floating plant without root is led by the water, feeling melancholy I want to come and see you. Otokoyama Biku Shinkai (Priest Shinkai at Otokoyama).”

Kiyohara Yukinobu employed her well-honed talents to paint the image here of another accomplished female, the poet and court lady Ono no Komachi, who was numbered among the famous “Thirty-Six Poets.” These luminaries were illustrated by Japanese painters since the 11th century when they were originally grouped and their portraits often inscribed with one of their own poems in the elegant calligraphy of their times. The style of the present painting is typical of the Heian yamato-e or Japanese style of painting as its focus on Japanese subject matter and techniques revived in the Muromachi period and practiced by successors thereafter. The revival is attributed to painters of the Tosa school, with one of whom–Tosa Mitsuoki (1617-1691) son of the school’s founder–Yukinobu collaborated, contributing a double album of the Thirty-six Immortal Poets with Mitsuoki’s images of the Sumiyoshi and Itsukushima shrines as the first and last leaves of the the album that was designed as a wedding present (fig.1). The emphasis on abstraction, geometrization, an elevated viewpoint, and impressions of delicacy and refinement are all in play, while the vivid color, often characteristic of early yamato-e is greatly subdued here.

Despite this Tosa-school association, Yukinobu was in fact born into and closely associated with painters of the Kanō family, each of these major two schools of painting having originated during the Muromachi period. The Kanō, artistically, had their inspiration and roots, in contrast to the Tosa heritage, in imported Chinese styles. Nevertheless, the great Kanō Tan’yū, the first official painter of the shogunate and Yukinobu’s teacher, was distinguished by the facility to cross stylistic borders, working as he did in the yamato-e style that was otherwise the preserve of the Tosa school (fig. 2). Another image of Ono no Komachi by Yukinobu is now in the Minneapolis Museum of art, the poem brushed by an imperial prince (fig. 3). The romantic waka poem composed by Ono no Komachi here was written for Yukinobu by the lay Priest Shinkai. 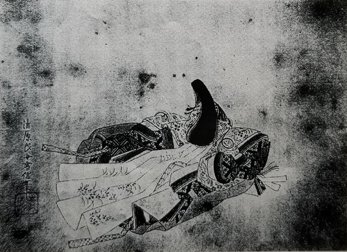 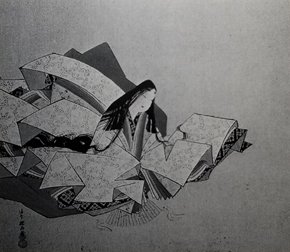