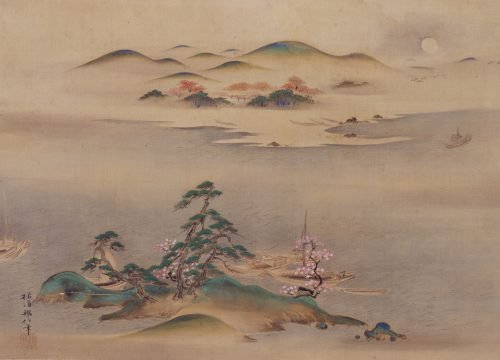 Gently undulating green hills define the banks of a wide river on which boats dance among waves. The season is clearly autumn, with maple leaves on the distant banks already turned a lovely red, and the time is early evening when the moon has just risen and the few boats remaining on the river head for home. The season and time combine to evoke a mood of quiet reverie, when the accomplishments of the day are summed even while one remains conscious of the time of relaxation and pleasure during the evening and night still to come.

According to the 19th-century Koga Biko, Kuninobu was born in Edo, the second son of Kano Tamboku Morikuni, head of the sixth generation of the Kano Kajibashi line.  His name was first Tanshu but changed to Yusei in 1800 when he was adopted by the Nakabashi branch of the Kano family, of which he eventually became fourteenth-generation head. Kuninobu was employed by the shogunate as an oku eshi, “painter of the inner court,” those who worked only for aristocratic patrons and who received an annual stipend of rice enough to feed 20 people for a year.  He also received title of hogen, “eye of the law,” second of three ranks granted to artists during the Edo period.

The composition of the present work is conventional, comparable to several done by Kano Tan’yu (1602-1674), who had established a secure foundation for the Kano style in Edo. Tan’yu often painted works with seasonal themes, and much of the style here—the rendition of the maple trees, for example—can be paralleled in works by the earlier master. The use of strong and bright colors and a kind of controlled lyricism may be held the defining characteristics of the present painter.