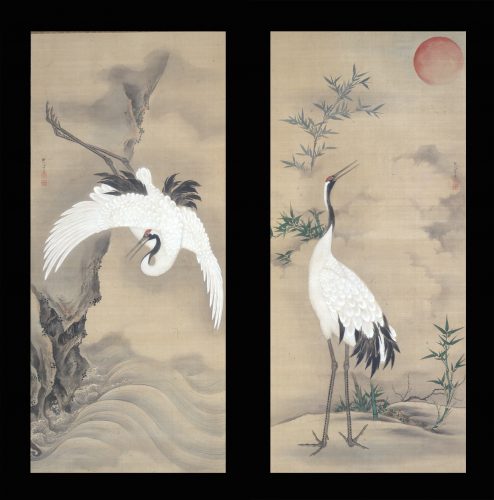 The two compositions present the cranes in contrasting yet complementary postures and actions, with open beaks curving along parallel diagonals, emphasizing the visual unity of the paintings. Throughout East Asia the crane is a generalized symbol of longevity and hence a subject especially appropriate for paintings intended as birthday offerings; the connotation of longevity is here associated with a high-minded appreciation of solitude and unspoiled nature. Living far from the bustling haunts of humans the crane was held a suitable companion for such paragons of purity as lofty recluses and immortals.

The immediate precedent for these works was an earlier set painted by the Chinese painter Wen Zheng, kept in the Shokoku-ji in Kyoto. According to temple records the pair was brought to Japan by Zekkai Chushin (1336-1405), sixth abbot of the temple, and subsequently influenced many Japanese artists, including the present pair.

Kano Isen’in (1775-1828) was born in Musashi province, son and pupil of Kano Yosen’in Korenobu, whom he succeeded as seventh-generation head of the Kobikicho branch of the Kano school in Edo. In 1816 he was given the highest rank of painters of the inner court, hoin, “seal of the law,” and adopted the name Isen’in used here, indicating that the painting was done after that year and before his death in 1828. The highly accomplished use of the brush visible here was thus the result of much experience and many years practice in the art.