Inscription:
‘Painted by Yuken in the Takugyoku Studio.’

Artist’s seal:
Kiso no in

Water weeds above and below define the watery world in which three large fish swim and feed. The body of the lowest fish overlaps several clumps of leaves and these in turn overlap the large and striking fish in the center, creating some degree of spatial recession that is supported by the ink-washed background. The fish are oriented so to provide maximum variety, with the lowest viewed from the top, the one in the middle from the side, and the uppermost from beneath the form. Colors and patterns used very effectively to suggest both the cool depths in which the creatures live and the vitality that drives them in their search for food.

Kano Atsunobu, go Yuken, and also known as Hino Atsunobu, was active during the Hoei era (1704-1710).[1] His father, Kano Eika, was active during the Teikyo era (1684-1687). The present painting represents a strong and expressive stylization of the subject, probably based at a distance on Chinese models (fig. 1) and still closer to nature than other renditions of the subject done by Atsunobu’s contemporaries (fig. 2).

1. Takugyokusai is not recorded as the studio name of Kano Atsunobu; it is, however, one name used by Matsudaira Norisada (1752-1793), a Confucian scholar who studied calligraphy and painting with So Shiseki (1712-1786) and who produced works in the style of Shen Ch’uan. Norisada, on the other hand, did not use the name Yuken, so it seems almost certain that the present work was painted by Kano Atsunobu. 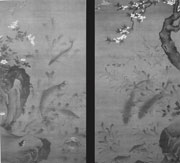