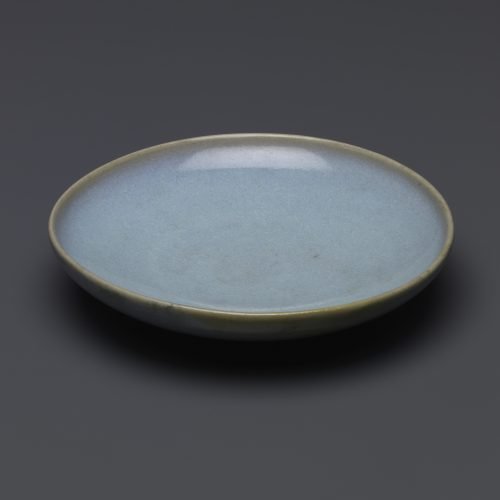 When we walked into our Chinese mentor’s study in Tokyo for the first time—he had just in fact christened us with the name Kaikodo–I was stunned to see among the other bits and pieces and paraphernalia on his desk, a light blue-colored bowl with water in it sitting by a few brushes leaning on a stand. I was taken aback because it was a Jun-ware bowl…revered Jun ware! He was a calligrapher and the disarray was a sign that he had been at work as we dropped in on him, but a Jun ware bowl! I was accustomed to seeing such ceramics in museums and most recently for me at that time clustered on a few shelves in the Percival David Foundation London where I had been a student. I had never ever expected to see such a ceramic being used, actually used, and casually at that, as a washbasin for dirty brushes! Another Chinese friend of ours, actually Taiwanese, a dealer of Chinese paintings in Tokyo, had on his desk a shabby little bowl, which didn’t bother me much because at the PDF Jizhou wares were not high on the list of admirable creations. It took some years in Japan, spending time with Japanese dealers and collectors, before I grasped the intrinsic value of what were considered “tea wares” in Japan. The elderly Chinese painting specialist had absorbed the Japanese aesthetic and it was a pleasurable experience for him to be greeted each day by his small, unpretentious Jizhou vessel.

The Jun saucer here is a typical form for the ware with its relatively thin square-cut foot from which the walls flare out at a wide angle to the slightly incurved rim. The glaze is rather thick, pale blue in color throughout, aside from the rim where the glaze has drained to a thinness that allows for the grey stoneware body to show through producing a mushroom-grey color. The glaze is finely crazed throughout and is characterized by a soft, muted luster. The dense crackling that often characterizes Jun glazes, along with their special jade rather than glass-like textures, and the magical glaze colors ranging from cool blues to bluish greens to green, remind us of the relationship between Jun and Ru ware and the complex histories attending these northern ceramic giants.