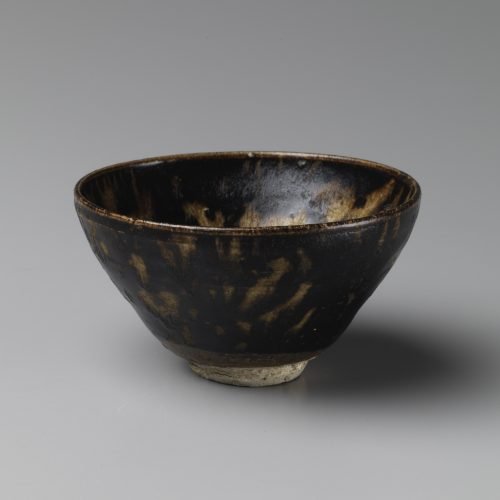 Published: Sharpening the Tools: Imagery and Accoutrement from the Scholar’s World (Kaikodo, Autumn 2017), no. 31.

Although we think of Jizhou bowls and dishes as traditional dining and drinking vessels and most suitable for the collector today, they could well serve the calligrapher at his or her desk where they might be used as brush washers. Along with the contemporaneous Jian ware of Fujian province, Jizhou bowls can also be appreciated for their tactile qualities—inviting one to hold them rather than simply admire from a distance, in contrast to the majority of Song dynasty wares.

Jizhou potters produced a great variety of wares, some decorated with designs inspired by metalware, textiles, and painting. They also looked to nature for inspiration: through a leaf plucked from nature that could be floated beneath a glaze where its carbonized skeleton was preserved in black after firing or through a combination of colors to produce the look of a tortoiseshell, as in the present bowl. As noted in previous issues of the Kaikodo Journal, various containers, hair ornaments, combs and jewelry fashioned from actual tortoiseshell had been in vogue since the Tang period and it might have been works such as these that served as the inspiration for the Jizhou potter.