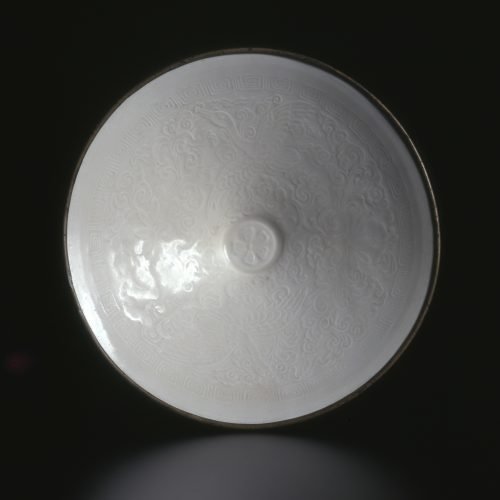 Of conical shape, the bowl is delicately potted with its thin walls rising from a miniscule foot. The interior is molded in raised relief around a small well with two large peony blossoms on opposite sides, their multiple petals and leaves along with smaller interspersed blooms all with finely detailed veins creating a design quite naturalistic and lavishly ornamental at the same time. Covered with a warm-toned glaze including the foot and slightly recessed base, only the lip rim was left unglazed and burnt pale orange in firing.

The escape southward of the remnants of the Song court and its followers after the capture of the emperor and fall of Kaifeng to the Jurched invaders was accompanied by a migration to the south of artists and laborers, and of ceramic fashions as well. The newly established capital in Hangzhou became the production center of an official ware, guan ware, in emulation of the Northern guan and Ru wares of the Northern Song emperor and as a claim to some of the symbols of imperial legitimacy. At the same time the dynamic center of ceramic production in neighboring Jiangxi province was also impacted by this move, the evidence here in a bowl produced at Jingdezhen in the style of the hallowed Ding ware of the north.

Ding had flourished under the Song dynasty when its court resided in Kaifeng, where it had received imperial blessing and had become a trendsetter with wide popular appeal. The present Jingdezhen version of Ding ware not only approximates the molded floral décor but was also fired on the lip rim in Ding fashion. That the desire for the Jingezhen “Ding” ware had migrated into other regions is evidenced by a 13th-century hoard of ceramics– the inventory hidden away by a merchant in Sichuan for safe keeping likely at the threat of Mongol invasion—where such Ding-style dishes along with the typical Jingdezhen yingqing wares and celadons from Zhejiang had also been hidden away.