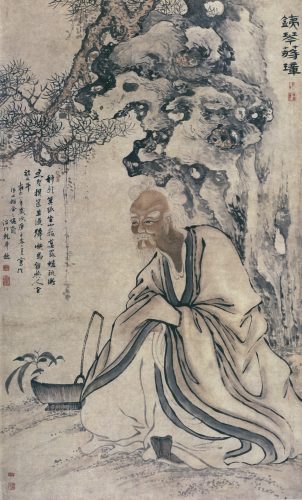 Colophon by Bao Gao (1708-1765):
“With head bared and legs outspread he sits and listens to
mountain music,
fatigued by the Curling Peach Festival, the Master of Arts is
immovable;
With basket on arm he will soon disappear, returning home
like an island bird,
leaving his pledge among men to bless them with longevity.

During the second lunar month, spring of the year 1730, the
eighth of the Yongzheng reign-era, written at a dawn-lit window
of a public house in Hanshang (Yangzhou) by Bao Gao, called
Haimen.” Songyue shanfang; Shiheng yizi pingheng; Qiushui zhangtianyi yin

At the base of a large rock, through the perforations of which the trunk of a pine can be seen, sits an old man who rests his clasped hands over the knee of a drawn-up leg at right angles to the horizontal leg beneath him. His hair is tied up in two braids, and by his side rests a basket of flowers or possibly peaches. These are attributes of Lan Caihe, one of the Eight Immortals of Daoism, depicted not in the vigorous state of early manhood as usual but rather as a quiet, reflective, and grandfatherly sage.

Jiang Zhang was from Dantu, the modern Zhenjiang in Jiangsu province. He and two others from the same district, Zhang Qi and Cai Jia, were known as the “Three Great Masters of Jingkou.” Jiang’s earliest known painting was done in 1729 together with Li Shan, Chen Zhuan, Bian Shoumin, and Huang Shen, who constitute the core of the artists known as the “Eight Eccentrics of Yangzhou.”

Bao Gao, a poet, painter, scholar and writer of the colophon on the present painting, was likewise an important member of art circles in the city, writing a colophon for a collection of inscriptions written by Yuanji (1642-1707), the greatest master of the previous generation in Yangzhou. Jiang was also given notice in the Yangchou Huafang Lu, a later 18th-century guidebook to the wonders of that important mercantile city in which the latest in every fashion was sought out and acquired: “Jiang Zhang painted large scrolls with figures and was as famous as Yingpiao (Huang Shen). He was especially skilled at finger painting and excelled in singing, being followed in the city by vocalists who were called the Jiang School…”