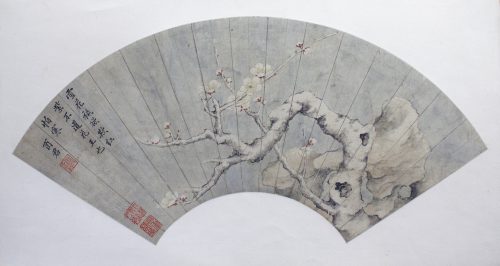 Inscription:
“The snowflakes just want to impose upon the red and purple blossoms,
not to say that the King of Flowers (peony) doesn’t also fear the cold.
Youjun.”

A branch of blossoming plum rises on the right from a garden rock and extends leftward, its twisting in space conveying some sense of three dimensionality. The strong strokes and strength of the branch set off by contrast the delicate nature of the blossoms, which seem unaffected by the snow that covers its support. In his inscription, the artist seems to contrast the fortitude of the blossoming plum with the much more delicate peony, which could survive the cold and snow being inflected on the plum blossoms. The two lines of the poem derive from a work by Fan Chengda, with a change to huawang, “King of Flowers,” from meihua, “blossoming plum.”

Jiang Tingxi (1669-1732) was one of the most important officials of his day, and eminence for which his family background prepared him well.1 His grandfather had held various offices during the final years of the Ming dynasty and his father, Jiang Yi (1631-1687), served as censor in Jiangxi province, during which period he became well-known for depicting the suffering of his charges and submitting those pictures along with memorials on the topic to the throne. Jiang’s elder brother became governor-general of Yunnan and Guizhou provinces, and Jiang’s son and grandson also became important officials and thus continued the family tradition of scholarship and service to the end of the 18th century.

Jiang Tingxi’s early training included horse-riding, swordsmanship, and playing the musical qin, and he most likely studied painting then as well. However, it was not until the 1690s that Jiang seems to have turned seriously to painting, when he was in Beijing and met the great landscapist Wang Hui (1632-1717). Jiang also painted together with the flower-and-bird-specialist Ma Yuanyu (1669-1722), who was from Jiang’s home-town of Changshu in Jiangsu province and may have known Jiang from very early years. Both artists were influenced by the style of Yun Shouping (1633-1690), and Ma is said to have forged works of both Yun and Jiang for sale.

In 1699 Jiang Tingxi passed the second level or juren examination and was granted the jinshi degree in 1703, after which he rose steadily through the imperial bureaucracy: member of the Hanlin Academy, complier, secretary in the Imperial Study, and, in 1717, sub-chancellor of the Grand Secretariat. Working in close proximity to the emperor brought increased appreciation for his paintings, both from that ruler and also from other members of the court. Students such as Li Shan (1686-ca.1756) were assigned to study with Jiang, and requests for his paintings grew apace.