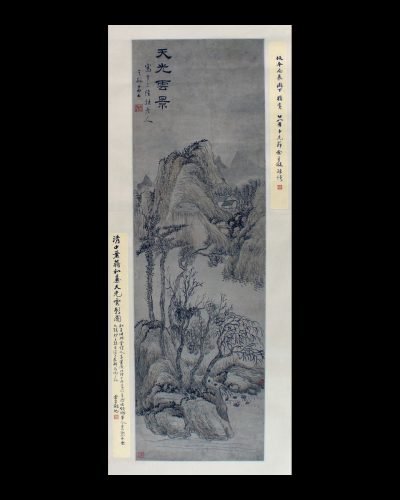 Inscription:
“’Heavenly Radiance over Cloudy Scene.’ Painted by the grandson of Old Clumsy who wrote out the thirteen classics, Jiang He.”

Right: “For the refined judgment of His Excellency Bureau Chief Sakamoto, on the fifteenth day of the seventh lunar month of the year 1939, respectfully presented by Yu Jinho.” Seal: Yu Jinhe yin

Left: “’Heavenly Radiance over Cloudy Scene,’ painted by Jiiang He during the middle years of the Qing dynasty. His zi was Zhongshu, and he was from Jintan but moved to Liangxi. Because he was in charge of selecting books for the library, he was appointed Master of Records and subsequently awarded the juren degree. He excelled at painting figures and landscapes, all of which were refined and marvelous. He was good at li script-style and wrote the ‘Collected Explanations for the Shuowen.’ He was a grandson of Jiang Heng. Yu Jinho.” Seal: Yu Jinhe yin.

The inscription establishes a connection between the artist, Jiang He, and his grandfather, the eminent Jiang Heng (1672-1743), “Old Clumsy,” who was famed for having written out the complete thirteen classic texts in kaishu or standard script-style, a task finished only in 1738 after ten years of writing. The grandson called himself Xiaojuo, “The Lessor Clumsy One,” in further recognition of the connection.

Jiang Ho’s painting is a quintessential literati painting, with little narrative content and much attention to brushwork. As in paintings by the Yuan master Ni Can (1301-1374) a foreground riverbank is separated from the far ground by a river, the blank interval allowing the brushwork of the trees to be clearly seen against that backdrop. Simple architectural structures nestle in a mountain valley, suggesting the bucolic life to be obtained living far from urban culture, making the painting irresistible to those like Jiang He who in fact was a bureaucrat living far from such bliss.

Jiang He was born in Jintan, Jiangsu province, but later his grandfather and parents moved to the literati center of Wuxi in the same province. On receiving his juren degree in 1786, Jiang was appointed Instructor in the Directorate of Education. A prolific author, Jiang wrote books on earlier texts, calligraphy, painting—especially bamboo, and anthologies of earlier writings on art. His interests were equally wide in painting, and he became known for landscapes, figures, flower-and-bird compositions, and even portraits—a literati master indeed.

The colophons on the mounting was written by Yu Jinhe (1887-1945?), who was born in Shaoxing, Zhejiang province. After graduating from the Imperial Japanese Army Academy in 1911, Yu served as mayor of Beijing during the Japanese occupation. Arrested after the defeat of Japan in 1945, Yu died in prison.