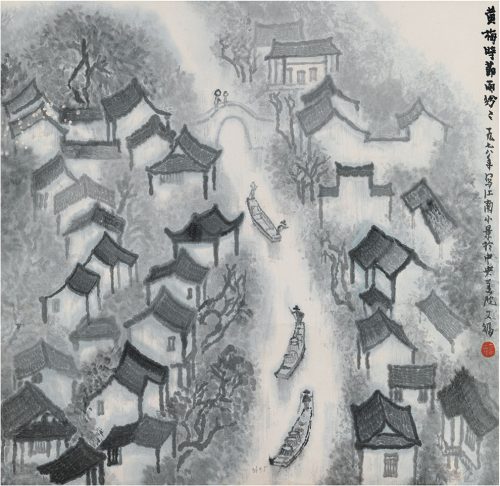 “Season of the Yellow Plum Blossoms” 1978

Inscription:
“During the season of yellow plum blossoms, raindrops fall in profusion. During the year 1978 I did this small scene of Jiangnan at the Central Art Academy. Yufu.”

Three boats ply their way up a canal, heading for a bridge that spans the opposing sides. The canal suggests that the specific Jiangnan locale that inspired the artist was the city of Suchou. Tile-roofed houses line the banks, their structure and orderliness emphasizing the irregularity of the trees and the varying orientations of the boats. The scene is reminiscent of Corot, and some of van Gogh, with the placid scene animated by inanimate structures—the houses—which are varied in size, structure, placement and tonality to create a simple but very satisfying pictorial image.

Jia Youfu was born in 1942 in Suning, Hebei province. In 1965 he graduated from the Central Academy of Fine Arts, Beijing. After studying with the master landscapist Li Keran, Jia took the topography of the northern Taihang Mountain range as his special subject. Jia Youfu has won numerous prizes in national and international competitions, and has many exhibitions to his credit, including those in Japan, Singapore, Hong Kong, and Korea. His works have been featured in more than ten publications, including one in Taiwan. He is currently Professor at the Central Academy of Fine Arts, Beijing.