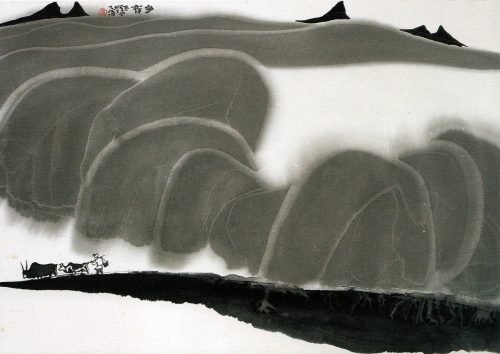 Inscription:
“‘Sounds of the Countryside.’ At the Hall of No Splendor, Youfu.”

A farmer follows two oxen as they return home from a day in the fields, oblivious to the massive splendor of the ranges of mountains above and beyond them. Enclosing a sea of clouds, these peaks are rendered mainly in dark-grey wash with lighter grey borders separating them from succeeding mountains. The dark foreground and the dark ranges visible in the background seem curiously separate from the middle ground area, as if tangible reality encompassed works of imagination within.

Jia Youfu was born in 1942 in Suning, Hebei province. In 1965 he graduated from the Central Academy of Fine Arts, Beijing. After studying with the master landscapist Li Keran, Jia took the topography of the northern Taihang Mountain range as his special subject, and that is surely the genesis of the image found in the present painting. Jia Youfu has won numerous prizes in national and international competitions, and has many exhibitions to his credit, including those in Japan, Singapore, Hong Kong, and Korea. He is currently Professor at the Central Academy of Fine Arts, Beijing.