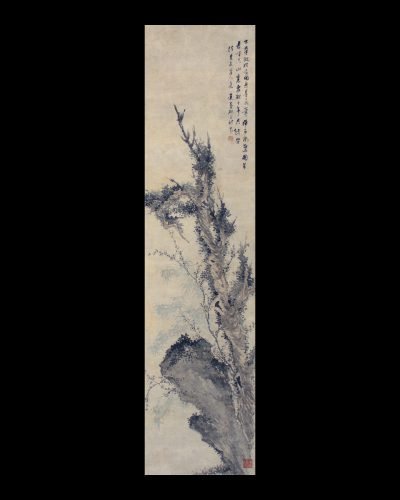 Inscription:
“Lowering the brush from left to right
one should use military methods; Ink
flying and brush in position.
the (?) phoenix soars.

With the picture finished I sigh at length,
if only I were within the mountains;
To old trees of a thousand years,
I would then swear allegiance.

Done after a theme of the Plum Blossom Daoist (Wu Zhen)
by Ji Fen, called Lianye Yanzhu (`Master of the Lotus-leaf Inkstone’).”

The broad brushstrokes and generous use of ink do indeed have their origins in the work of the Yuan dynasty master Wu Zhen (1280.1354), mentioned in the artist’s inscription. Ji Fen approaches this rather conventional theme by emphasizing the variety of textures inherent in the subject matter. The coarseness of the bark of the cypress, the smooth surface of the large garden rock, and the tensile strength of the plum branches are all deftly defined by a few strokes of the brush. Forming a backdrop to the other elements of the composition is a curtain of bamboo, subtly painted in pale blue tones.

Ji Fen (originally named Ji Wei), zi Xiaoyou, hao Danshi, was from Xiushui, the modern Jiaxing in Zhejiang province. His father, Ji Nan (1760-1834), a teacher and artist-friend of Xi Gang (1746-1803) and Fang Xun (1736-1799), had named his garden the Yiyou and called himself “Old You,” whence came Ji Fen’s by-name of “Little You.” Ji Fen was trained as an artist by his father—as were his brothers, Ji Yao, Ji Zhao, Ji Deji, and his cousin Jiang Fan—and studied poetry with Sun Gushan.

As a mature artist Ji Fen was adept at landscapes, bamboo and tree paintings, figural—including Buddhist— subjects, and bird-and-flower paintings. He stated of his approach to painting: “In my paintings, I do not seek beauty alone but, forgetting the brush in my hand and the paper before my eyes, try to make manifest the momentary emotion within my heart.” During his lifetime Ji Fen worked cooperatively with such other well-known artists as Jiang Baoling (early 19th c.), Weng Luo (1790-1849), and Tao Guan (1794-1849).