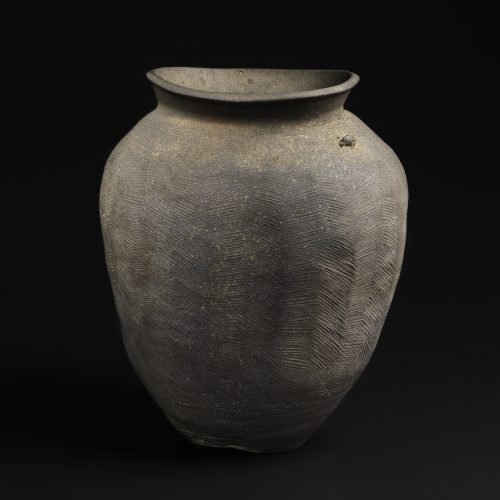 The dark grey, dense-bodied stoneware jar was hand-built by the coil method, batted into shape, and the surface finished with a batted or stamped herringbone pattern. Its medieval home in Ishikawa prefecture would achieve later distinction by way of the brightly and boldly decorated Kutani ware even though that colorful enamelled ware was produced much further south.

In the general region of Suzu City, which gave its name to the ware, numerous kilns have been discovered, datable from the 12th to the 16th century. The wares produced there were fashioned essentially for use in agrarian communities and to serve the needs of an agrarian economy. Suzu stonewares, as were numerous wares produced across Japan during its medieval period, were fashioned as hearty, sturdy, durable, storage jars but appreciated later for their natural beauty, attractive simplicity, and ineffable aura of antiquity.