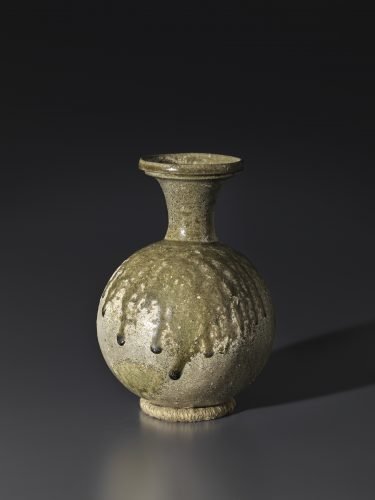 Two identical bowls luted together vertically created the spherical body, a slight seam present after firing still visible. After the body was ‘cheese hard,’ the relatively tall neck with flared top and grooved rim was attached. The precision of the bowls and regularity of the neck and rim suggests they were made on a potter’s wheel. The grey, loosely compacted, coarse stoneware has an irregular coating of a deep olive-green glaze, predominantly on one side where it falls in thick stepped drips over the vessel’s body. A thinner glaze crust or skin appears on the neck and drips are visible inside the mouth, the glaze a result of contact with ash during firing, either falling upon or being blown by drafts on the body during firing. The rounded base is prompted upright with a donut-shaped rope support.

Both China and Japan developed high-fired, glazed stonewares, supplanting in domestic life the low-fired ceramics of precedent times. However, the roads to those developments were strikingly different. China’s signature early glazed stoneware, known as Yue ware, had ancestors dating from the Shang dynasty 1700-1027 B.C., a couple millennia prior to the production of Yue. The Japanese journey in the production of glazed stoneware, on the other hand, was not an independent one. China’s achievements, the means and methods of the Yue craftsmen, reached Japan via southern Korea, where a stoneware, known as Kaya ware, was produced under Chinese influence from around the 5th century A.D. The high-fired vessels and objects of the 6th-7th century in Japan was a widespread phenomenon with increased use of the fast-turning wheel and greater technical control evident during the 7th century. Vessels very similar to the present have been excavated and published in Japan where they have been ascribed to the 7th century (figs. 1-3).

Ceramics that originated to serve as ritual accoutrement became more purely utilitarian in nature and would serve as the foundation for high-fired wares thenceforward, giving birth to Japan’s “Six Old Kilns” and others in operation along side of them. The stoneware tradition in Japan, in fact, was a long-term one and at the fore of artistic and aesthetic developments and popular appreciation to the present day, the parallel with China in stoneware production reappearing over time. 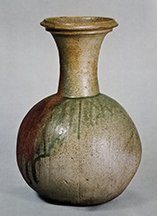 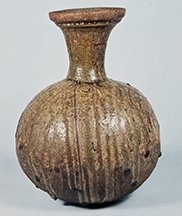 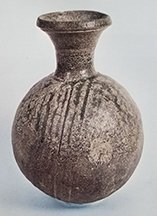