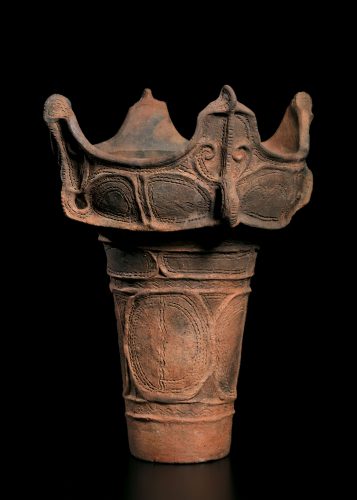 The form of this ancient vessel is comprised of a main body zone with straight sides angling slightly outward from a flat base and a wide mouth with four peaks rising equidistantly to form a dramatic rim. The earthenware clay was incised and sculpted to produce a decoration symmetrical in its overall appearance but with elements in the design that circumvent the balance. Four large oblong shapes in upright positions decorate the body, each oval bifurcated by a pair of wavy lines and each with dotted or rouletted lines forming interior borders, the ovals placed adjacent to one another, the entire design enclosed above and below with additional bands of wavy lines that circle the vessel. Further elongated ovals are repeated horizontally above forming a transition to the bowl-like mouth that is elaborately worked, the quadrants formed between the peaks each decorated with designs that are variants of the body décor consisting of pairs of irregular rather than strictly oval shapes. These enclose patterns of dotted lines within their ridged border while further ridges and dotted-line designs fill the interstices. The pairs of these irregular forms are separated from each other below by a ridged openwork loop in high relief leading to serrated ridges ascending to peaks with flattened circular terminals. The fabric of the earthenware vessel is reddish-brown in color and granular in texture with a number of blackened areas, while the interior is relatively smooth and even in texture and color.

The name Jōmon n conjures the dynamic universe of Japanese Neolithic pottery, a world of ceramics that continues to haunt us with the immense audacity, individuality, and creativity that brought it into being and the boundless diversity it encompasses. These ceramics combine a superior sense of design with a soulful, brute strength; they are at once primitive and modern. Extravagantly individualistic, unique in the history of world ceramics, and with an aesthetic mooring that never weakens, Jōmon pottery could well be categorized as a “Wonder of the World.” Jōmon

The present example from this wond’rous world is very close in design and detail to vessels discovered in Ibaraki prefecture on the northern Kanto plain, categorized as Otamadai, sometimes rendered Atamadai, one of the numerous divisions into which J o¯ mo n pots have be e n stylistically and geographically assigned (figs. 1-3). The vessel illustrated in figure 1 was commented upon by Edward Kidder, pioneer in the field of Japanese Jōmon pottery in the West: “Atamadai’s castellated rims are Jōmon pottery’s most extreme. They rise of f a large, overhanging rim collar and are so ornate as to bring into question the essential usability of the vessel.”1

Vessels in this group have in common their aggressively symmetrical rim designs with cresting uprights, combined with raised ridges partitioning and mapping the surfaces of the vessels into greater and lesser sections, and finally with impressed lines, grooves or dots highlighting the cartography. The Otamadai Jōmon pottery produced on Honshu’s Pacific-ocean side, where the examples illustrated here were found, have been described as “calm” in comparison to the more dynamically charged vessels produced to the southwest near the Inland Sea or those produced to the west in the area of Nigata on the Sea of Japan. These are considered the most flamboyant of all—the style not surprisingly referred to as the “f lame style.”2 However, the Otamadai pots have an essential fire of their own and are admired for their melding of dynamism and grace.

Jōmon, “cord-marked,” is a descriptive name indicating in general, not exclusively, how these Neolithic pots were decorated, that is, through the use of cord-wrapped paddles to beat or impress the clay or by means of cord pressed into the clay to form any variety of desired design. The name itself, however, denotes not only the ceramics but also the people and their culture, as well as the time during which they flourished. The use of this simple term in this comprehensive fashion indicates the importance of the ceramics to the culture. If the ceramics do define these peoples, it must have been a very diverse population and at the same time interrelated, which is evinced in the cross-fertilization of ceramic styles. Immense regional diversity combined with several millennia of development makes understanding the wares and their interrelationships very difficult, a task tackled and grappled with by scholars over many decades. Even if the interpretation and application of those results are not always easy for the followers of the pioneer researchers, we have been given guidelines. In addition, archaeological discoveries and chance finds continue to add to our armoury as we attempt to control in our minds and our accounts this vast tribe of wares.