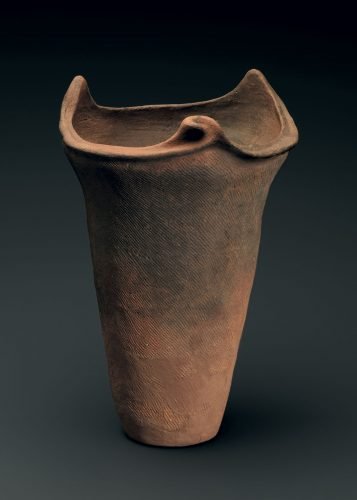 This elegant jar of relatively light weight is of elongated conical shape rising from a flat base to a tri-peaked rim. Each peak was formed as a cresting wave in clay along the grooved rim. The surface of the outside of the jar is roughly combed on an oblique angle sweeping around the earthenware body that has burnt predominately a muted orange color below and a charcoal grey above the midsection. There is faint mica visible throughout.

The jar was found in Chiba prefecture where the extensive Horinouchi shell mound has been the source of numerous Jomon finds over the years. A Late Jomon (c. 1500-900/300 B.C.) jar from that site, excavated from “a deep layer of clamshells,” is characterized by superficial surface decor that does not interrupt the sleek lines of the vessel and further by a grooved mouth rim similar to the present, described as “diagnostic,” and, lastly, by three upright flourishes on the rim (fig. 1).[1] This tripartite rim division is in contrast to the four-pointed rims that were more characteristic of products of the Middle Jomon (roughly and variably, depending upon location,c. 3000/2500-1500 B.C). The extensive Horinouchi shell mound, a site of prolific activity and production during the Neolithic period, is noteworthy because of the standardization of certain shapes, some characterized by such features as flaring walls, thinner walls, and light brownish clays along with patches of black.

The vast and sprawling landscape of Japanese Jomon pottery is dominated in our minds today by the aggressively sculptural pieces of the mid-Jomon period. A swarm of variations of extraordinary creative vigor grew to populate this landscape in conjunction with the rise of an agrarian economy, and the decline of the style appears to have coincided with the expansion along the east coast of Honshu of a prosperous aqua-economy based on fishing. These late Jomon peoples left their mark on the coastal landscape in the form of the great shell mounds they left behind and the all-important associated find, pottery, of which the present piece is a telling example.

In contrast to the exuberant sculptural earthenware creations of Middle Jomon potters, their successors along the eastern Honshu seaboard seemed to have taken a step back, without really regressing, since a sophistication and actually quite new and fresh aesthetic were born. The ceramics of this new breed share such features as stark lines, minimal surface ornament, and conical shapes with much earlier Jomon jars (fig. 2). However, the later ones exhibit sophistication, complete command of materials, and their simplicity and reserve were intentional and purposeful. 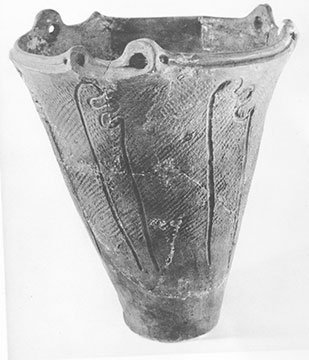 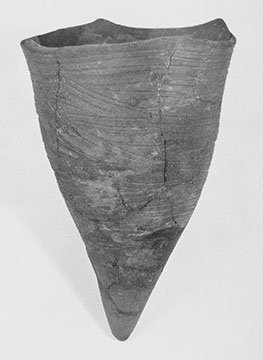