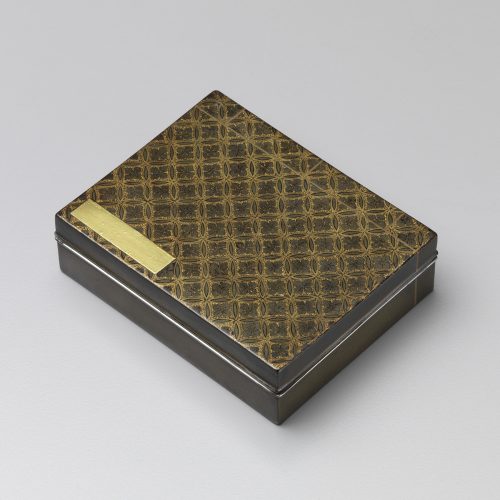 Formerly in a Japanese collection

The intriguing rectangular box is in the form of a closed book, a traditional tome opening from left to right, made of paper and stitched together with hand-sewn binding. The designs are produced with sprinkled gold powder, or gold maki-e, and gold and black painting and applique on a black lacquer ground. The top suggests a decorative paper or brocade cover with cash or floral diaper pattern produced with gold and black lines on a gold maki-e ground. A rectangular title slip in gold foil was applied in the upper left hand corner. Realistic detail extends even to the representation of the binding threads, done in fine gold lines on the back seam and along the top and bottom corners. The base and interior of the box are covered overall with fine gold sprinkling on black. A metallic powder is mixed with the lacquer on the sides, resulting in a dark coppery brown color in those areas. The lips of lid and bottom are trimmed with silver.

Japanese lacquer was an important export commodity in the 17th-18th century, transported to Europe by the Dutch East India company. So popular were these wares in Europe that lacquer ware become known as “Japon.” Empress Maria-Theresa of Austria (1717-1780) was known to have had a collection of Japanese lacquer boxes, which she valued very highly and bequeathed great number of these tiny treasures to her daughter, Marie-Antoinette, who continued to collect and proudly display these wares. Small boxes, in the form of traditional Japanese books as the present, are known to have been in this resplendent collection, now in the Musée National des Chateau de Versailles et de Trianon.

It is not unlikely that such accouterment were also available in China. The holdings of Japanese arts and crafts, predominantly from the Edo and Meiji period, in the Qing imperial collection included books, paintings, porcelain, enamelware, lacquer, embroidery and furniture, and it is not beyond reason that a small box such as this, perfect for holding incense or small chips of fragrant wood, would have been included as well.