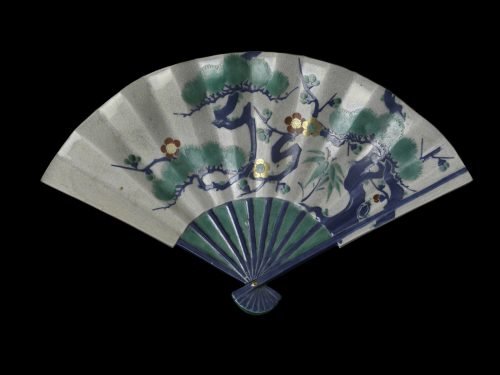 The remarkably realistic folding-fan was constructed from a low-fired clay, the ceramic glazed overall aside from spurs and the bases of the three short cylindrical feet on the reverse and is decorated with the “Three Friends of Winter.” The trunks and the branches of the pine and prunus trees are depicted in thick cobalt-blue enamel brushed in broad calligraphic strokes with turquoise-green pine-needle clusters, red and gold enamel plum blossoms, each with their characteristic five petals surrounding the central stamen and pistils depicted in green or gold, with several green buds each encased in blue sepals, the composition completed with single-stroke green bamboo leaves sprouting from blue stems, all on a bright crackled, milky, greyish-colored glaze. The fan stays are also in blue, with green in the interstices between the stays, held together with a gold “pin.” The reverse is undecorated and covered with the same bright, smooth, greyish-toned cracked glaze and revealing seven unglazed circular patches burnt brown in the firing where the ceramic was supported during firing, and three short cylindrical feet.

By the mid-17th century, Kyoto had come under the influence of a new wave of tea ceremony masters led by Kobori Enshū (A.D.1579-1647) and Kanamori Enshū (A.D. 1584-1656) whose aesthetic mindsets graduated from the austerity, restraint, modesty and economy promoted by Sen no Rikyū (A.D. 1521-1591), widening the scope of tea taste and making the explosion of gaiety and color in the world of ceramics possible. Kyō-yaki, “Kyoto ceramics,” sometimes called kiyomizu-yaki, added gemlike sparkle and gleam to a world overflowing with exquisite paintings, lacquer work, and textiles and ceramic decorators were certainly not blind to these contributions. Note a detail from a screen by the 16th-17th-century Rimpa painter Sōtatsu, where an aesthetic shared with the fan dish here is evident (fig. 1) or a detail from a painting by Suzuki Kiitsu of the early 19th century, where the Rimpa convention for depicting pine boughs was clearly a model for the painter of the present dish (fig. 2).

Actual folding fans were a popular accoutrement in Kyoto society and a favorite format of her painters and provided the ceramic decorator here with a suitable form for his captivating and festive design. The signature blue and green pigments were punctuated with red and gold to produce enchanting images in these wares that seem to shimmer and glow yet are also notable for their clarity and cleanliness. The early enameled wares of Kyoto that established a foundation for the present dish include a charming nest of “Three Friends” boxes (fig. 3), a sake bottle with flowering plum and narcissus (fig. 4), and a sake ewer recognizable as kyō-yaki simply due to its blazing colors on the crackled glaze ground (fig. 5). The torch was carried by Nonomura Ninsei (active c. A.D. 1646-1690) [see cat. 23], who continued to blaze a trial and make the journey of a successor, responsible for the creation of the fan-shaped dish here, possible. 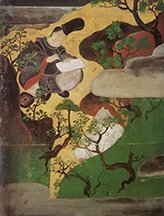 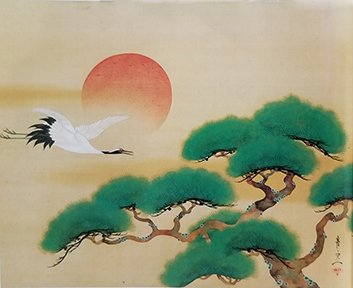 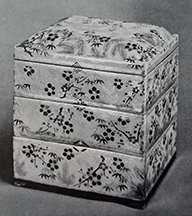 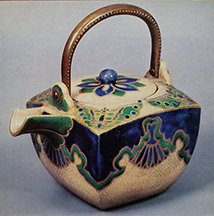