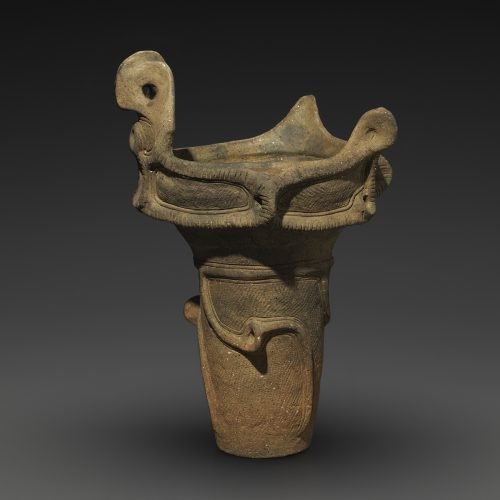 The coarse earthenware has a dark rust to grey coloured surface that sparkles here and there with minuscule quartz and mica particles. Steadfastly planted on a flat base the cylindrical body widens slightly to support the massive concoction that surrounds the wide mouth. Ropes of clay are raised prominently to outline a pattern of three pairs of horizontal panels, the clay ropes jutting from the surface to form outcroppings on three sides and on the fourth a dramatic crest with circular apertures miming those on the sides of the vessel, the ropes of clay notched, perhaps to simulate twisted strands, while the interiors of the panels are cord-marked with striations somewhat haphazardly arranged. The body itself is streaked with similar striations as background for narrower, more supple and fluent ropes of clay forming swags around the vessel with eccentric outcropping on three sides.

Niigata prefecture in western Honshu near the Japan Sea where the present ceramic was reportedly discovered has been a treasure trove in recent times of Japanese Neolithic pottery. The Middle Jōmon style of wares discovered in that area is typified by exuberant composition and strong sculptural features. The vessels are often shaped with flat bases and slightly bulging, roughly cylindrical bodies that widen from base to shoulder. The necks and mouths are worked into complex and flamboyant configurations, the mouth rims culminating in pinnacles as the vessels are applied with ropes of clay, the clay pulled and sculpted, pierced into openwork designs and impressed with cords, cord-wrapped sticks or roulettes.

The vessel. furthermore, with one side towering and dominant, looks asymmetrical—perfectly normal, exactly what we expect. However, when the high pinnacle is viewed straight on, it is surprising to see that an order and symmetry prevail in the design of the upper reaches of the jar. Despite the spontaneity and sense of organic “growth” that make such Neolithic pots so engaging and theatrical, then, there was obviously some deliberation and calculation beneath the drama. And this approach has migrated from century to century and into current times. Behind the unstudied, natural, artless creations of Japanese potters there can exist a finely tuned, perfectly honed “method” to the making.