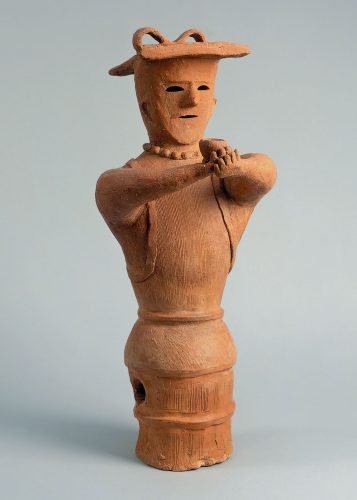 The hollow figure was constructed using slabs of clay to produce a composite geometric form with simple and generalized features. The body, supported on a hollow cylinder pierced with a hole on each of two sides, is depicted from the hips upward, the body to the waist roughly triangular, the waist cinched around a tunic curving over the hips. Strips of clay detail the tunic while the arms swing forward, the simply modeled fingers holding a small offering cup. The face is flat with the nose triangular in section, the eyes like half moons, the mouth a mere slit hinting at a smile, and small rudimentary ears low on the sides of the face. A hat sits flat on the head projecting forward and back and is surmounted by two loops. Large beads of clay are arranged as a choker around the neck.

Identifiable as a female through the characteristic flattened headgear and necklace, the figure holds up a cup in a gesture of offering similar to that of a seated female figure excavated from a funerary mound in Gunma prefecture in Japan who is said to represent a participant in the funerary ceremony (fig. 1). Another, also holding a cup but with the headgear now missing, is dressed in a similar tunic flat against the body and looping under the arms, detailed with vertical striations and bedecked with a similar single-strand beaded necklace (fig. 2). Yet another female haniwa figure is depicted in seated posture, with the same unusual double loop on the headpiece as the present figure and also depicted with a similar flat chest (fig. 3). Haniwa, produced from earthenware clay, were always left unglazed but were sometimes painted, as in an example in the Brooklyn Museum of Arts, whose female characteristics are clearly modelled (fig. 4).

The period from the late 3rd through the 6th century in Japan was distinguished by an influx of art and technology from Korea and a tradition of burial for the elite that was so distinctive that these centuries are known as the Kofun or “Old Tumulus” period. The deceased were buried in graves marked by large aboveground mounds. While the interred grave goods—metal, stone, glass, and ceramic objects—might be associated with Korea, the ceramics placed above ground in plain sight are a purely Japanese phenomenon. They are called haniwa, “clay circle,” referring to the basic cylindrical forms from which they originated. The simple, unadorned, hollow post- like cylinders served as a fence when aligned together, connected by cords through the holes on opposite sides of the cylinders.

Haniwa evolved sculpturally. The different forms surmounting the cylinders that were retained as bases include representations of objects such as ceremonial symbols, military gear, boats, tools, and architectural structures, and such figures as birds, fish, animals and humans. Haniwa were assembled and aligned either in a fence-like fashion surrounding the tumuli, in rows atop the mounds, or in more elaborate arrangements that likely depicted funerary processions and rituals.

The generalized mask-like faces of human-figure haniwa convey a naïve, almost childlike approach to the fashioning of these effigies, just as do the simple columnar forms of the bodies, the tubular arms, the unarticulated rolls of clay to form fingers or beads, and various appliqués to detail the simple clothes. At the same time, the images themselves are haunting reminders of their otherworldly associations.

Haniwa were multifunctional: physically practical (as guards against soil erosion), defensive (the military figures guarding the tombs against both mundane and supernatural invasion), symbolic (the assembled figures representing the funerary procession and a measure of one’s wealth and power), and spiritual (marking a boundary between the sacred and profane, with architectural models possibly serving as domiciles for the souls of the departed).