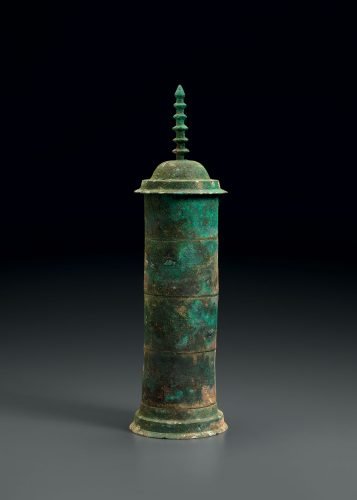 The container is of cylindrical form with thin walls rising from a stepped foot surrounding a deeply recessed base, the vessel divided into four sections by the three horizontal grooves that circle the vessel. A domed stupa-shaped cover fits snuggly on the container with a stepped rim and slightly flared lip. A finial cast with five disks stacked vertically and terminating in a bud-shaped knob surmounts the lid. The surface of the metal is dark green with patches of turquoise, some areas exhibiting reddish-colored encrustations and minute dots of black, presumably particles of the charcoal that was characteristically used to line the interiors of sutra mounds.

The value of the Buddha’s teachings to the Japanese of the Heian period was demonstrated by their efforts to safeguard and preserve the scriptures, or sutras, during an anticipated time of lawlessness and calamity. Mappo, literally the “end of the law,” was calculated to ensue in the year A.D. 1052. It was also calculated that this dark age would last for an incomprehensibly long period of time—over 5 billion years—until the coming of Maitreya, the Buddha of the Future. In order to preserve the recorded teachings until the arrival of Maitreya, they were engraved on such permanent materials as stone and metal, but the more usual practice was to copy them on paper and sometimes silk, roll them into scrolls and deposit them in ceramic or metal vessels, and then consign them to the ground in sutra burials under mounds of earth. While Japan remains the home of the great majority of extant sutra containers, they are also treasured outside of Japan as exemplified here by two bronze receptacles from museums in America (figs 1-2).

Perhaps the most surprising finds in sutra mounds have been Chinese yingqing or white ware sutra containers from Jindgezhen or kilns in Fujian province that were used in place of the bronze vessels (figs. 3-4). Chinese also provided large, usually black or brown glazed stoneware storage jars that were used to contain and protect the ceramic or metal cylindrical sutra containers, along with such other offerings as mirrors. Whereas these large jars were often used onboard boats as storage containers for certain kinds of cargo and thus are found in many areas outside of China, the Chinese ceramic sutra containers are found only in Japan and were most likely made to order.

The small underground crypts were lined with stone and sometimes charcoal, piled with dirt and the mounds surmounted by a stone marker such as a stele or lantern. An inscribed bronze sutra container with images of Buddhist divinities and a date corresponding to A.D. 1114 is now in the Nara National Museum where it is kept with the steatite outer case that protected it over many centuries (fig. 5). As noted above, the large brown-glazed ceramic jars from China sometimes used in place of the domestic stone containers in the sutra burials were generic storage vessels and were widely distributed.

The A.D. 1114 sutra container and the present example each has a finial formed by a series of stacked disks. The domed-shaped lids and finials approximate the appearance of Indian stupas, which were monuments of the greatest import as they housed relics of the Buddha. The stupa’s form and function provided the foundation and inspiration for the development of the pagoda in East and Southeast Asia, The sutras that were buried in Japan were also relics of a kind, substituting for the Buddha, awaiting the appearance of his manifestation as Maitreya, at which time they would be gloriously exhumed.

One of the oldest extant mounds excavated in recent times was that ordered by a courtier of the Heian period (A.D. 794-1185) in 1007 on Mount Kinpu in Nara prefecture.[1] While the practice appears to have spread nationwide, it is not surprising that sutra mounds were concentrated in the environs of Nara, the center of a large Buddhist community, and in and around Heian-kyo, or Kyoto, the imperial capital during the Heian period, where they were usually located on sacred mountains or within shrine or temple grounds.[2] Apparently, however, more than sixty percent of known sutra burials are from the northern part of Kyushu, due both to the prosperity of and deep-seated religious beliefs held by the local aristocracy. The motivation for burial of sutras, it should be noted, was not entirely and exclusively to preserve the word of the Buddha. While such preservation of the scriptures might have been “an act of historical responsibility, an investment in the future,” according to Moerman, he also is quick to note that individuals would commission sutra burials wishing for their own rebirth in the paradise of the compassionate Amida Buddha.[3] It was thus that the Lotus Sutra, holding promise of eternity in Amida’s Pure Land, was treasured, read, and copied ad infinitum by Heian period devotees.

The sutra containers were therefore able to deliver paradise to the devotee long before the coming of Maitreya and, in fact, directly to the living in the here and now: it was the heavenly beauty of the present container, illumined by hydrangea on the verge of blossoming, in the tokonoma of a Tokyo establishment that made the historically important container irresistible on a purely aesthetic and emotional level. The spirit of the Buddha was indeed present (fig. 6).

1. For an in depth study of sutra burials see D. Max Moerman, “The Death of the Dharma: Buddhist Sutra Burials in Early Medieval Japan,” in Kristina Myrvold, ed., The Death of Sacred Texts: Ritual Disposal and Renovation of Texts in World Religion, 2010, pp. 71-90. 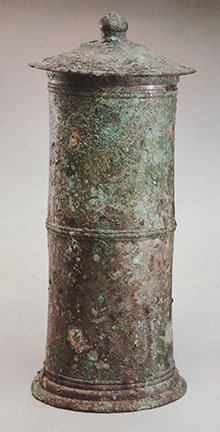 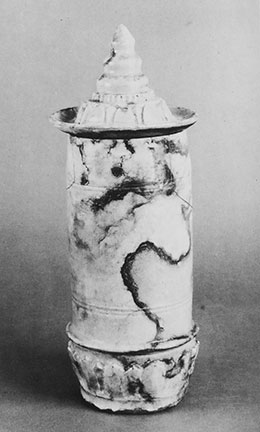 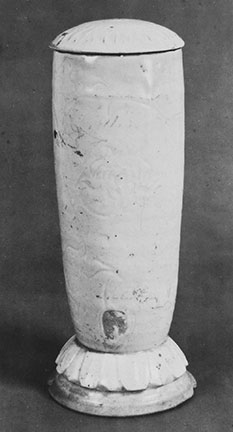 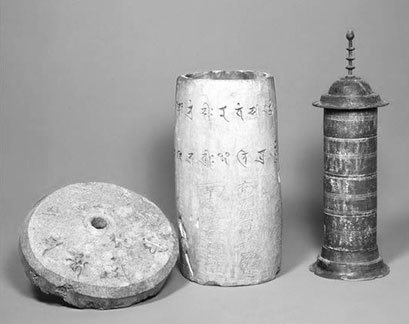 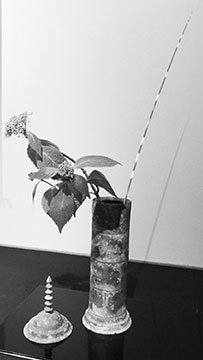