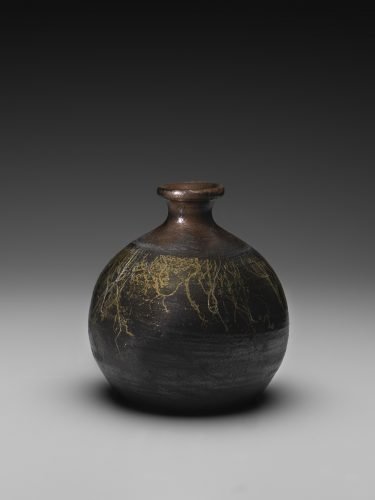 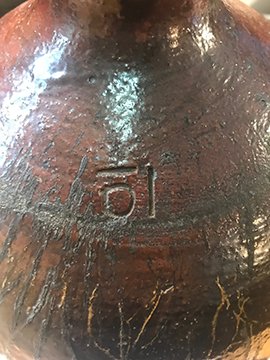 The bottle is of rounded form on a flat slightly concave base, the sloping shoulders rising to a constricted neck that terminates in a thick rounded mouth rim. The vessel is glazed overall including the interior of the mouth and neck but excluding the interior of the vessel, where a swirl at the bottom remains from wheel turning, and the base where the exposed iron-rich stoneware clay burned brown in firing. The initial thin, glossy, maroon-colored glaze was supplemented by a second coating applied from the shoulder down to the base producing a darker tone. A tangle of slightly raised ochre-colored veins appears to drape across the shoulder and upper body, a result of straw or grasses applied to the bottle before firing. Above the grass-décor, a circle-and-line mark was cut into the body on the upper shoulder with its single layer of glaze.

The funa tokkuri, “boat bottle,” is a vessel with low-slung body and wide sturdy base that would have ensured stability when used aboard a boat or ship. The present bottle, however, was not intended to be used as such but rather to function in a tea ceremony setting when it was produced during the Momoyama period (A.D.1573-1615) when Bizen production had become strongly under the influence of tea ceremony taste. The rather rough, natural look was not as natural as it was a production, the crystallized grasses on the shoulder, a perfectly planned event. Evolving originally out of agrarian wares from the 13th century onward, as did the stonewares of many of the old kilns that adapted to the whims of tea ceremony tastes, Bizen wares, produced at kilns in the Inbe district, are bold, somber, with a sense of the rustic and the antique, here with the vitrified grasses twinkling and lightening the mood. The present grass decoration is rarely seen in comparison to the far commoner hidasuki effect created when the grass or straw burns away completely, leaving red scorch marks behind. A number of these “grass-decorated” buoyant but earthbound tokkuri are known today evincing their success within the world of tea specialists (figs. 1-2).

The mark on the shoulder of the present vessel is one graph or symbol among a vast number found on Bizen wares, symbols that might identify a workshop, a family or clan of potters, a guild, or even an individual potter. The present mark is known from heirloom pieces, appearing on a lengthy list compiled by Maria Roman Navarro in her study of Bizen.1 Navarro notes that the number of marks increases markedly during the Momoyama with Bizen “singular among the Japanese for their great variety: from circle, laze, loop, cross, lattice, several strokes, etc. to Chinese characters or numbers” and that “…..pre-firing marks are meaningful identification signs during the initial handling of the vessel. This implies they are related to production, immediate sale, and patronage.”2 It has also been noted that the very conspicuous placement of marks on the shoulders of vessels used by tea masters, and especially the tokkuri bottles, is unique to Bizen wares.3 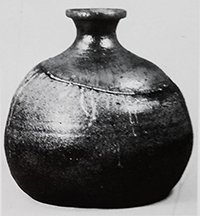 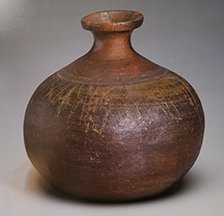