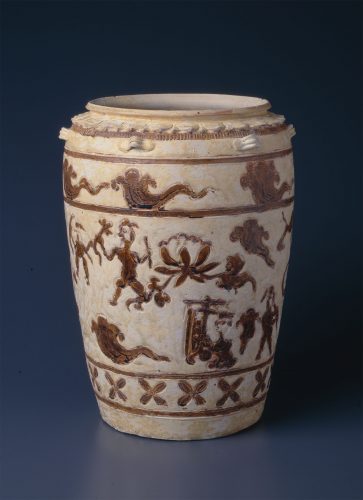 The vessel is in the form of an elephant standing on all fours, its chubby legs locked straight to give the vessel sturdy support, the jaunty upturned trunk forming a spout. A circular aperture through the back mounted with a cylindrical neck with flaring mouth was used for filling the vessel, and the tail is looped into a handle for the vessel. The body and legs are modeled rather generally while the head is more carefully contoured to suggest the excrescences natural to the head of a real elephant, one with the small ears–those common to the Indian and Southeast Asian elephants. Cobalt pigment, firing to a greyish-blue under the transparent glaze, was used sparingly to enhance some of the creature’s anatomical features but more to provide decoration for the vessel, which also suggests how the elephant might have been bejewelled and garbed for ceremonial events.

The technique of using cobalt to paint designs on the surfaces of ceramics before glazing was learned from the Chinese masters by potters in Vietnam. The feeling of seriousness and sophistication of the Vietnamese wares produced in the 15th century, when the Chinese models were being closely followed, gave way to a more spontaneous and light-hearted feeling, as well as more local flavor, in the products of the following century when the present elephant-form ewer was produced.