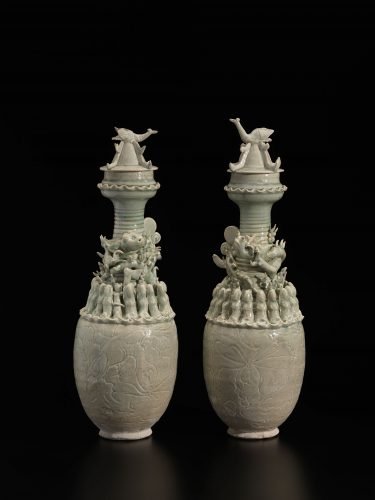 Inscription:
“Done in emulation of the surviving ideas of Huanghao Shanqiao (Wang Meng). Shuming (Wang Meng) and Yuanzhen (Ni Zan) were friends. Shuming’s density avoided the sparseness of Yuanzhen, but when complete, the brush and inkwork of Yuanzhen’s sparse fields and by-ways were extremely dense, while the brush and inkwork of Shuming’s dense fields and by-ways were very sparse. The two masters were still different while yet being the same. But those who haven’t gone to the Yueyang Pavilion, and personally seen Immortal Lu playing his flute, should rein in and stop, cover and (put out) the lamp, for (otherwise) within mistakes there will be mistakes. Painted and inscribed by Qin Bingwen, called Yiting.”

Qin Bingwen was born in Wuxi near Suzhou on Lake Tai. He earned a zhuren degree in 1840 and subsequently held office as Secretary in the Ministry of Revenue. He is best known today as an important collector and connoisseur, his collection of 339 paintings having been catalogued by his grandson Qin Qian in 1929. Most of Qin’s own paintings are inscribed as having been done after Yuan masters and such Ming artists as Shen Zhou, but very often his works are close in style to the early Qing or orthodox masters who preceded him, such as Wang Shimin.