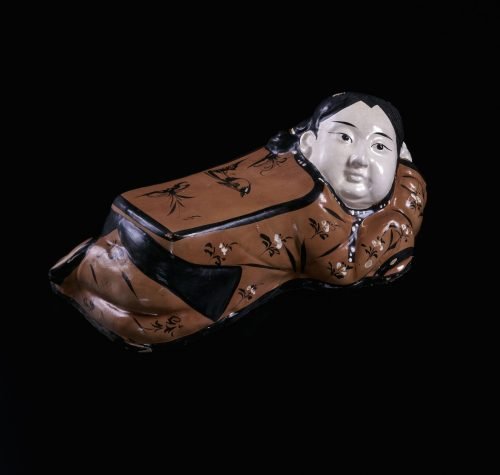 Pillow in the Form Reclining Lady

The figure is curled up on her side with legs bent back and arms pulled snugly under her head, her full rounded face turned slightly up and aglow in white pigment, with eyes and brows expressively drawn in brownish-black pigment. Her clothing, an amber-colored robe patterned with leafy sprays, covers her body completely. The rectangular headrest is also slip coated in amber-orange and painted with a jaunty long-tailed magpie balanced on one leg.

The “lady” pillows, as these are sometimes called, have been found in tombs in Henan and Shaanxi provinces, products of northern kilns specializing in slip-decorated stonewares, known popularly as Cizhou wares. These pillows were among the numerous specialties and surprising creations of these kilns, the lady pillows such treasured possessions of the living that that simply could not be left behind. The posture, modeling and amber dress were repeated with little variation in the production of these pillows whereas the subjects decorating the headrests are more varied and unique. While the human form of the pillow does not strike us as anything particularly odd, similar to animal formed pillows in concept, the headrest conceived and executed as an independent painting–a horizontal album leaf as it were–is most intriguing. In such Cizhou wares one is able to experience the arts of ceramics, sculpture, and painting united in one piece.