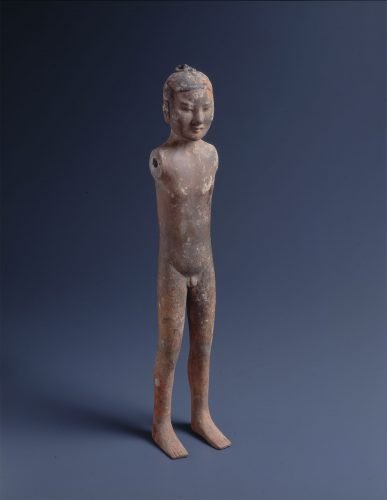 Inscription:
“The God of Kitano
wears an unwoven Chinese robe,
But we recognize him from
the blossoming plum
held within sleeves.”

Nobutada was from an aristocratic family, one of only five of status high enough that they were entitled to act as imperial regents and as advisors to the emperor. Although born for government service, due to a misalliance at an early age he was banished to Satsuma in southern Kyushu. In 1596 he was forgiven and allowed to return to Kyoto where he served in a high post as a chief advisor. After retiring in 1607 he lived the life of a literatus and became known for his waka-style poems, but it was as a calligrapher that Nobutada left his greatest mark, and the present painting seems more written than drawn.

The subject here is the great statesman and man of letters, Sugawara Michizane (845-903). Beginning in 943 Michizane was worshipped as a deity, prayed to as Tenjin, the “Heavenly God,” a title granted him by imperial decree in 986. Tenjin, representing the spirit of Michizane, came to be regarded as the god of learning and especially of calligraphy.