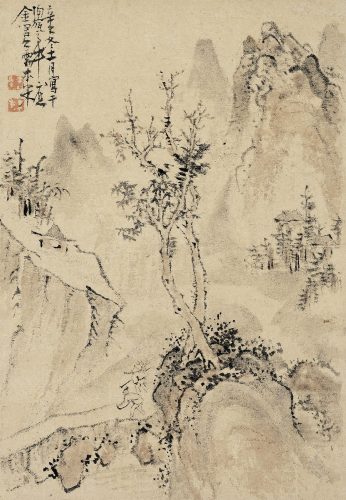 The low table, with typical openwork waisted frame, curved apron, and cabriole legs, bears an exquisite mother-of-pearl inlay design against a black lacquer ground. A scholar’s villa is depicted in luxurious detail, conveying the aura of the supra-refined environment where the gathered gentlemen are engaged in a variety of urbane activities, with servants in attendance. A dramatic pine and swirling clouds provide a handsome canopy above with low grasses blanketing the garden and surrounding the well-appointed villa. Naturalistic vignettes of birds on flowering branches combine with abstract diaper patterns to decorate the sides and legs of the table.

Mother-of-pearl is the term used for the iridescent layer that forms on the inside of mollusk shells. Although long known to the Chinese, it was not until the Tang dynasty in about the 8th century that truly creative work was done using this material. It was a painstaking procedure to divest the mollusk of its treasure and to produce new treasures that we can see today from such Tang-dynasty contexts as tombs and treasure troves. The marine material continued to be utilized and admired over the centuries as an attractive and versatile enhancement for lacquer-covered implements, musical instruments, various receptacles, and furniture. The present table is related in form, decorative techniques, main subject matter and secondary decorative motifs to others believed to have been produced during the late Ming to early Qing period.