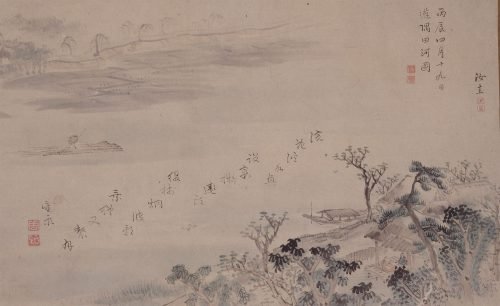 This prehistoric Japanese earthenware vessel is roughly conical in shape. The entire surface of the jar is incised, carved, combed and imprinted with markings like the skin of an ancient beast. The fabric of the jar is thick, reddish grey in color and with mica particles throughout lending a sparkle to the surface

The term Jomon, ”cord marked,” is the name given a Neolithic period and culture, one that lasted for around 10,000 years. The present relic of this great tradition has features in common with wares that are categorized within the very broad family of Neolithic ceramics known as Katsusaka, named after the type site in Kanagawa prefecture in the Kanto district of Japan. Typical is the penchant for sculpturesque handles arranged asymmetrically and a vessel surface decorated in a relatively restrained manner, in comparison to other contemporaneous pottery styles in Japan.