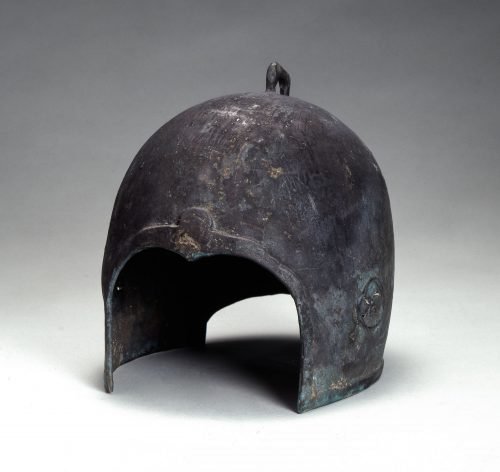 The cap–shaped Chinese bronze helmet was designed to fit over the head of a warrior, covering his ears and forehead but leaving the face exposed. The helmet is reinforced along the edges with a thickened band on the exterior surface while a whorl-circle on each side comprised of four crescent shaped apertures provides openings over the ears. The crown is surmounted by a loop-shaped finial. The small triangular hole on the right side might well have been caused by an arrow or a blow from a spearhead.

Precedent Shang-dynasty helmets were in some instances more elaborate in form than the present and fashioned to cover the back of the neck and sporting fearsome animal or taotie mask decoration. Simpler, less cumbersome helmets, such as the present, also came into fashion by the late Shang period. While the functionality of the helmet is its supreme virtue, its brute artless nature is also compelling witness to the military character of Chinese Bronze-age culture.