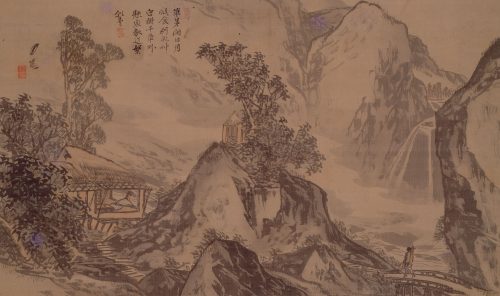 Of ovoid shape with short neck and rolled rim, the jar is finely potted with thin, even walls and rests on a slightly flared foot with flat base. The green glaze spills onto the interior of the rim and falls in evenly spaced thin sheets over the rounded shoulder. It pools to a deep forest-green color just below the neck and also on the sweeping edges and thick drips toward the base. The high quality of this jar is evident in the compact pinkish earthenware as well as the glazed interior, which is a golden-yellow color.

The vast number of monochrome and multi-coloured jars shaped like the present that survive today, all members of the extensive group known in general as sancai, “three-colored ware,” testify to their popularity as Tang period funerary accoutrement. While the tombs received their due in the figural ceramics that were on service and protective duty in the afterlife, the jars, such as the present, would stand by with their contents ready for use. At the same time, they would lighten, brighten, and enrich the environment with their simple jewel-like colors, as if in fact the netherworld was studded with large, colorful, perfectly formed gems. The present jar is indeed such a gem and was once a treasured possession of the Idemitsu Museum of Arts in Japan.