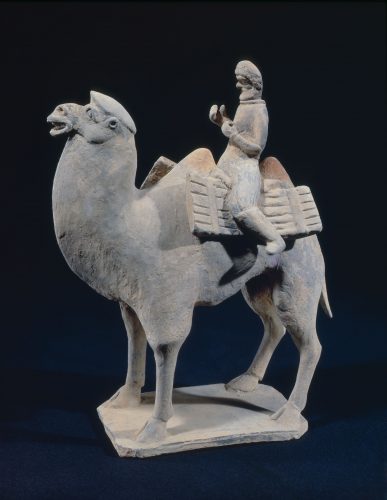 Colophon:
Poem added by Ko Fuyo in the year 1782 for a friend

Ko Fuyo (1722-1784) was born the son of a doctor in Takanashi Village in Yamanashi district. He studied Chinese culture in Kyoto, concentrating on Confucianism and the art of seal carving. He gave up his original surname of Oshima and adopted the Chinese surname Gao, pronounced Ko in Japanese. He was later called the ”sage of seal carving” and it was in that speciality that he made his greatest contribution to Edo culture

Fuyo’s “Traveller with Staff” was painted in 1777, one year after the death of his friend Ikeno Taiga, and was done in emulation of the style of Zhang Ruitu (1570-1641), a major artist of the late Ming era in China.