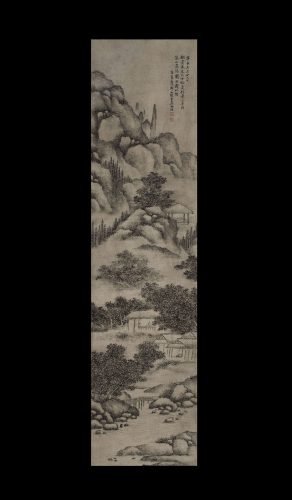 Inscription:
“On the twenty-sixth day of the sixth lunar month of the year 1680, for the sixtieth birthday of Xuchuang (‘Window of Happiness’), I followed an earlier conception in doing this ‘Lofty Recluse Amidst Streams and Mountains’ and also inscribe it in his honor. Respectfully recorded by Benxiao, called Ying’a Shanqiao (‘Mountain Woodcutter of Ying’a’), his younger brother of the same birth year.”

The recipient of this complex painting has not been identified but he was obviously of importance to the artist, for Dai Benxiao did two works to celebrate the auspicious occasion of Xuchuang’s sixtieth birthday. Now in the Honolulu Academy of Arts (2914.1), “Leafless Trees” celebrates another aspect of living in seclusion with a close-up view of a grove of ancient trees, with no humans or man-made structures to be seen. The inscription on the Honolulu painting includes a poem, but otherwise is dedicated to Xuchuang in very similar fashion, dated to the sixth month of the year and again identifying himself as having been born in the same year as his friend.