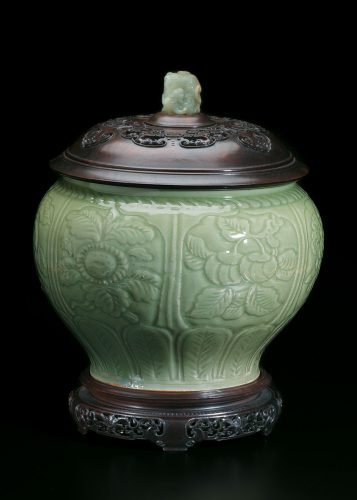 The unusually large and heavily potted jar is a standard guan shape with rounded shoulders, a short neck with rounded mouth and a sturdy countersunk foot with beveled edge. The handsome decoration is dominated by six molded ogival panels with alternating fruits, flowers, and fungus, including a peach bough, a sunflower, a pair of loquats, a fungus spray, lychee and camellia. The sea-green celadon glaze is thick, smooth, and glossy. The jar is supported on a carved wooden stand and covered with a dome-shaped wooden lid with openwork carving and surmounted by a large white-jade knob

The Longquan ceramic industry in Zhejiang province rose to prominence during the Southern Song period (A.D. 1127-1279) especially stimulated by the presence of the imperial court in the same province, and serving a widespread market at home and abroad. The artistic and commercial momentum propelled production of these celadons on throughout the Yuan and far into the Ming dynasty. By this time the potters producing porcelains at Jingdezhen in Jiangxi province were not only providing awesome competition for the Longquan potters but also formed with them a kind of artistic brotherhood…. sharing, stimulating, and competing with each other. The present jar is a splendid example of the exchange of aesthetic ideas between these extremely successful kiln centers as well as being an example of the highest of the Ming-dynasty achievements of one of them.