Belt or garment hooks were created in great numbers and with great diversity of form and style during the late Zhou period as demonstrated in tomb finds across several provinces. Bronze was the usual substratum upon which gold, silver, turquoise and jade provided exquisite embellishment. What inspired the present design of square plaques of gold cast in the form of a dragon with body and limbs intertwined, alternating with square jade plaques carved with curling commas might remain a mystery. However, it seems likely that the small number of extant examples were produced at a single location and during the same period.

The gently bowed bronze garment hook is straight at one end, the wide shaft inset with jade plaques carved with repeated comma curls in raised relief alternating with gold plaques cast with intertwined dragons, the shaft narrowing into a slender neck terminating in the small dragon-head hook, the border areas with intricate geometric designs in gold and silver, the reverse silvered and with a raised whorl-decorated button for attachment. The present is among the very best preserved of known garment hooks of similar design and includes one in the former Kempe collection that was reportedly found in Luoyang, Henan province. 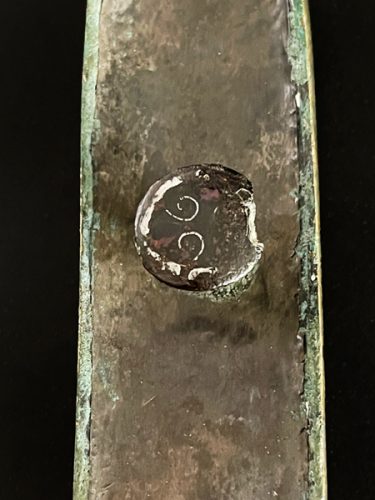