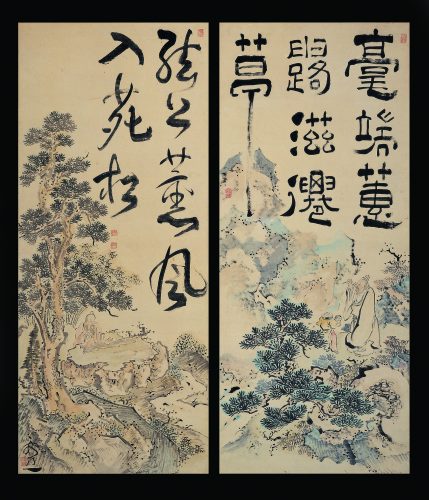 Artist’s seals:
Zenshin Sōma Houkyūkō (“In a Former Life I was the Horse Connoisseur Fang Jiugao”); Ike Mumei In; Kashō (“Woodcutter in Haze”); Sonsei (“In Accord with Life”); Sangaku Dōja (“Daoist of the Three Peaks [of Fuji, Tateyama, and Hakusan]”)

Box inscription:
“A pair of works painted and inscribed by Ike Kashō: ‘Inscribing Poetry on the Stone Cliff’ and ‘Playing the Qin beneath Pines.’ Written by Murata Kōkoku (1831-1912) at age seventy-eight (i.e. in 1908).”

Ike Taiga (1723-1776), arguably the most talented of the Nanga literati masters, was also one of the finest calligraphers of the entire Edo period, and the present painting exemplifies his varied talents to perfection.[1] Done probably in the late 1760s, when the artist was at the height of his creative powers, this pair of paintings can be used to summarize many aspects of Taiga’s artistic career. First of all, the subjects of the two works were derived from Chinese culture: the famed literati master Mi Fu writes on the surface of a rock in the right-hand scroll while Bo Ya, a renowned lute player, plays beneath pines in the left-hand scroll. The artist’s brushwork is also based on Chinese sources, most especially the literati school that flourished from the 14th century onward. The two different styles of calligraphy used by Taiga in his inscriptions are based on canonical Chinese models and demonstrate his comprehensive knowledge of and skill in the ancient script styles.

The paintings are not just derivative exercises, however, for Taiga’s transformation of his various sources is unique, unmistakably his own; Taiga painted not landscapes but Taigas. Especially striking here is the manipulation of style to support and characterize the theme itself. The angularity of the seal-script inscription on the first painting accords with the mountain forms and both serve visually to suggest the crusty personality of Mi Fu. In the left-hand painting the flowing ease of the running-script style parallels the movement of the stream and, further, suggests the melodic flow of music. Taiga’s poetic lines are striking in themselves but also extend the aesthetic experience beyond the visual to include sound, fragrance, and movement, a truly masterful manifestation of the full range of literati pleasures.