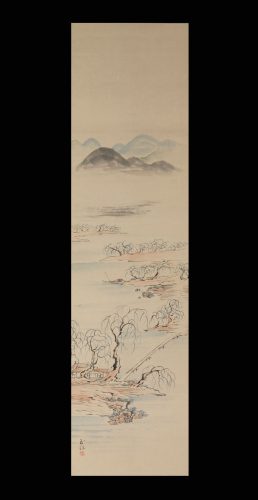 Trees overshadow several buildings on the near shore and point the viewer’s gaze to a skiff in the middle ground and the distant mountains beyond, evoking the aura of a serene summer day. The emphasis on alternating diagonals injects some sense of movement and activity into a composition that otherwise is appropriately placid. A spatial recession from front to background is clearly defined by the diminishing sizes of trees, while the repetition of similar shapes serves to unify this visual progression. Most personal in this painting, however, is the coloring, a contrast of warm and cool tones that further activates the pictorial plane and contributes to the overall impression of graceful elegance and tranquility.

Gyokuran was a talented waka poet and imaginative Nanga painter. She was the daughter of a Kyoto teashop proprietress and a samurai. Her mother, Yuri, and grandmother, Kaji, excelled in the writing of Japanese verse and during their lifetimes were famed even in Edo for their poetry and their beauty. As a young girl Gyokuran studied painting and by her late teens met the man who would have the greatest impact on her life, Ike Taiga (1723-76), one of the most important Japanese painters of the 18th century. Although it is not clear whether the two were ever formally married, they lived together a life focused on music, tea, literature, calligraphy and painting with little regard for making money. Gyokuran’s independent success as a painter is indicated by the fact that she was included as one of only sixteen artists listed in the 1768 edition of the Kyoto guidebook, Heian Jimbutsu Shi.1

1. For references on the life and work of Gyokuran, along with amusing stories about the artist who sometimes called herself “the Gion Eccentric,” see Howard Rogers, Kaikodo Journal, Spring 2007, vol. XXVI, no. 33.