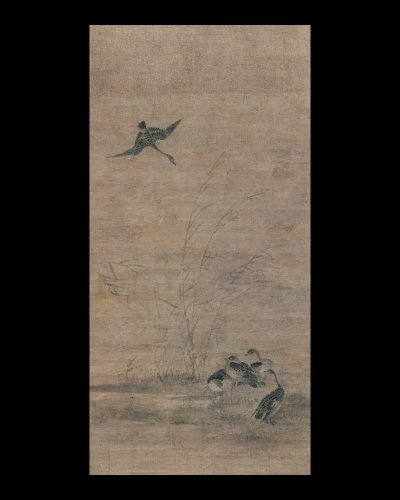 A goose depicted with gracefully outspread wings glides towards a shoal defined by tall reeds and grasses to join the birds that have already landed. Organized around strong diagonal axes, the composition is a masterful display of technical virtuosity. Pictorial space and a sense of recession are achieved primarily though manipulation of ink tonality, which also creates a mist-filled ambiance from which the images emerge as from nature itself.

The Buddhist monk Huichong (965?-1017), the painter to whom this evocative painting traditionally has been attributed, was skilled at painting domestic and wild geese and egrets and was especially good at small-scale scenes. Given the high praise of his Northern Song contemporaries, it is all the more disappointing that no extant painting can be associated with his original style and achievements with any degree of certainty. The style of the present painting makes the attribution here understandable, even though it is likely the painting was executed later in the Song period, perhaps during the early part of the 13th century.