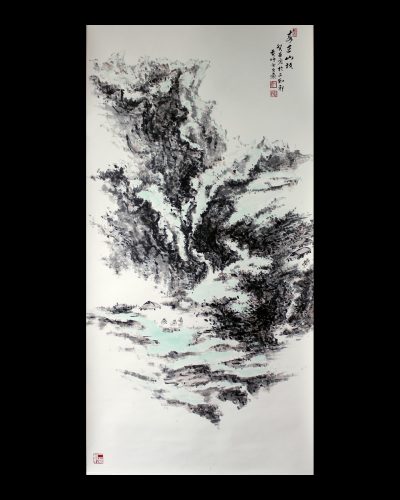 Born in 1943 in Shanghai, Harold was brought up in a cultured environment provided by his wealthy father, a noted collector, and his mother, an amateur Peking opera singer and painter in her own right. The family moved to Hong Kong in 1949 where Harold began serious training in Chinese painting. The talented youth was given his own one-man show at age nineteen and that same year embarked on an extended stay in Europe, returning home to establish a gallery dealing in Chinese painting. After decades of success in the business world, in 1990 Harold turned his efforts to his own creations. The present work was done three years after that momentous move, and some years after that, Kaikodo was pleased to mount a one-man show of Harold’s work, “Unperturbed: The Art of Huang Zhongfang” [Kaikodo Journal XVIII , November 2000]. As in other of Kaikodo’s monograph publications devoted to individual artists, a number of notable scholars in this case contributed to elucidating the artist’s life and creative journey. All agreed that Harold’s work is nestled naturally and comfortably, but creatively as well, in the heart of the literati tradition. The present composition depends on a kind of dynamism, however, unusual in traditional Chinese landscape paintings. Mountain forms seem to swirl toward a point at the center of the picture, as if drawn by some powerful gravitational force centered at that point. The washes of pale green tell us that spring burgeons forth even in such an unconventional world.