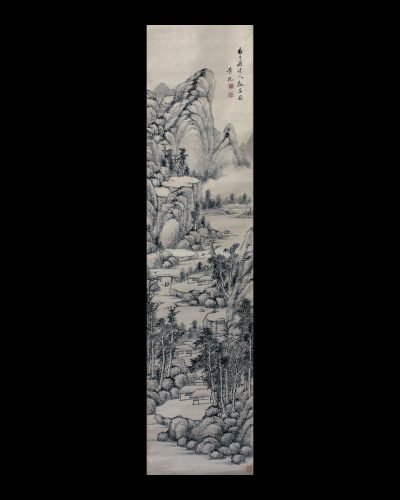 Several groups of houses appear beneath the foreground trees and others stand with a bridge in the middle ground; the river descends through clouds at the base of the distant peaks. No humans appear, and there is little of narrative interest in the painting. This pictorial choice concentrates viewer attention on the brushwork and the execution of the painting, which was also true of the model being followed, Huang Gongwang (1269-1354), one of the Four Great Masters of the Yuan dynasty.

Rounded, boulder-shaped units are combined and piled up to create the larger forms, and these are textured by interior strokes of varying orientations. Dottings of ink are used in various configurations and appear as grasses, shrubbery, and the foliage of trees. There is thus abundant richness in the brushwork alone, and this establishes the present artist as a worthy follower of the great early master.

Huang Yuan was born in Renho, the modern Hangzhou in Zhejiang province. Skilled in poetry as well as painting, Huang was praised by Yiaoyi, the abbot of the Nanping Temple in Hangzhou.