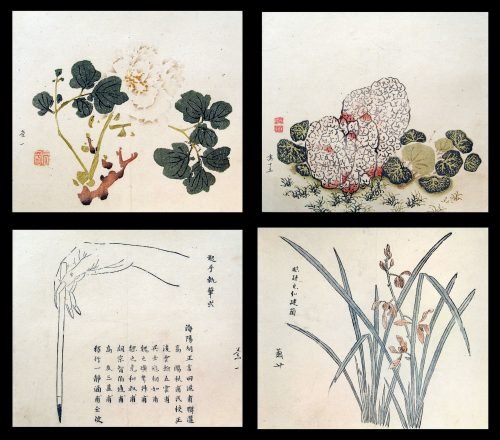 (For further information see Thomas Ebrey and Sara Yeung: ‘The Wonder That Was Nanjing’ in the present Kaikodo Journal XXVIII, Spring 2012, pp.13-20.)

This is the original 1633 (earliest) edition, with all pages printed from the original blocks. The prints were originally folded down the center and published as eight volumes in 16 fascicles, butterfly style. The excellent condition of this set is due to their having been remounted flat, in an album format, early in their history, sparing the leaves from the inevitable damage and loss that has occurred to all other early sets of the prints. The three albums are labeled ‘Heaven,’ ‘Man,’ and ‘Earth.’

Orchids
40/40 pictures (one picture showing a hand holding a brush, with a list of the eight co-editors, plus thirty- nine pictures of orchids, eighteen after Ming masters, and 21 of models for painting instruction)

One page colophon, written out, with three seals, twentieth century in date

Ink Flowers (Round Designs)
20/20 pictures
20/20 poems [The bamboo border on these poems seems identical with that on the set in the Cleveland
Museum of Art, for which see below]

Although the twenty-five text pages comprising the prefaces of the eight volumes are not present, this is the most complete set of pictorial leaves and poem/calligraphy leaves of any of the known sets of prints.

No two sets of the early printings have the same order in the volumes, nor do they have the same order of the prints within each volume, but there is good agreement about the contents of the eight volumes. The photos of the leaves are numbered according to the lists given by Paine (Archives of Chinese Art, 1951); his orderings were taken from a much later edition.

II. Orchids
40 pictures (one plus thirty-nine)
No poems for the pictures in this volume appear in any edition of the SZZSHP

Beijing, National Library of China, #16999, 152 pictorial leaves, with about the same number of poems. In good condition. This is best large set in existence, and comes from the famous collector Zheng Zhenduo. This is the only large set still in the original butterfly mounting; in all other early sets, the leaves have been remounted so both sides lie flat. So fragile, it has never been loaned and is very difficult for experts even to see in the Rare Book Room at the Library.

Beijing, National Library of China, #17768, 151 pictorial leaves, with about 150 poems. Missing the entire Bird volume. In good condition. This also is from the Zheng Zhenduo collection and has been displayed abroad. Both of the Zheng sets were given to the library upon Zheng’s death in 1957.

Beijing, National Library of China, #18117, 160 pictorial leaves, most poems. In fairly good condition. Not highly regarded by the Library staff.

Berlin, Museum of Asian Art, 128 pictorial leaves, but no poems, about 20 leaves badly stained, rest fairly good. Purchased in the 1920s. An extremely nice set except for the faults listed.

Boston, Museum of Fine Art, 127 pictorial leaves, about 10 badly stained, rest smudged; about 127 poems. This set was purchased by Robert Paine in 1950 from Jean-Pierre Dubosc, the great dealer in Ming and Qing art. May be the best set in the United States, but its so-so condition does not always make it a joy to look at.

Cambridge, MA. Harvard-Sackler (#2), 126 pictorial leaves, but no poems. In fairly good condition. Like the Berlin set, the poems have been discarded, perhaps because the collector had no idea that they were to be matched with the pictures. This set entered the Museum’s collections in 1976.

Cleveland Museum of Art, 172 pictorial leaves, but many (ca. 60) are badly book wormed. About 170 poems are present. A careful conservation project could make the book-wormed leaves look much better. This was the most recent set to enter a public collection, acquired in 1980 when Sherman Lee and Wai- kam Ho were at the Museum from the East Asian antiquarian book dealer Soren Edgren. This is the closest set to the set being offered, except for the latter’s superior condition and completeness.

Izumi, Japan, Kuboso Museum, 150 pictorial leaves, with about 110 poems, fairly good condition. This and the British Library copies are printed in different colors than the other first edition exemplars, with a grayish putty color often used instead of light green. The result is not good, with many of the prints looking like they are washed out.

Kansas City, Nelson-Atkins Museum 184 pictorial leaves, 130 poems. An almost complete set but in very poor condition. Most leaves are badly stained or foxed. The prints were in Lawrence Sickman’s private collection and went to the Museum upon his death. Sickman had owned them since at least 1950 and probably before.

London, British Library, 163 pictorial leaves, about the same number of poems. In good condition, all the leaves have been bound into one western-style volume. As noted above in discussing the Izumi Museum set, the colors of this volume are quite different than the other sets, and less pleasing. It was the first set to enter a Western collection, being recorded in an 1898 catalog of their books.

Moscow, Russian National Library 167 pictorial leaves, 165 poems. In good condition. With many seals of the Japanese firm, The Southern Manchurian Railway Company, this volume was taken back to Moscow probably in 1945, when the Russians overran the Japanese in Manchuria.

Nanjing, Nanjing Library. 81 pictorial leaves, 75 poems. Missing the Introductory, Orchid, Round Design, and Bird volumes. In good condition. One indication of the rarity of the ‘Ten Bamboo Studio Collection’ is that neither of the major cultural institutions in the hometown of the book, the Nanjing Museum and the Nanjing Library, have close to complete copies of the set of prints.

Shenyang, Liaoning Provincial Museum 121 pictorial leaves, about 110 poems. Missing the Bird volume. All leaves are very badly stained, with some foxing but if they could be conserved (and it is not clear if that is possible), then this could turn into a very nice set. 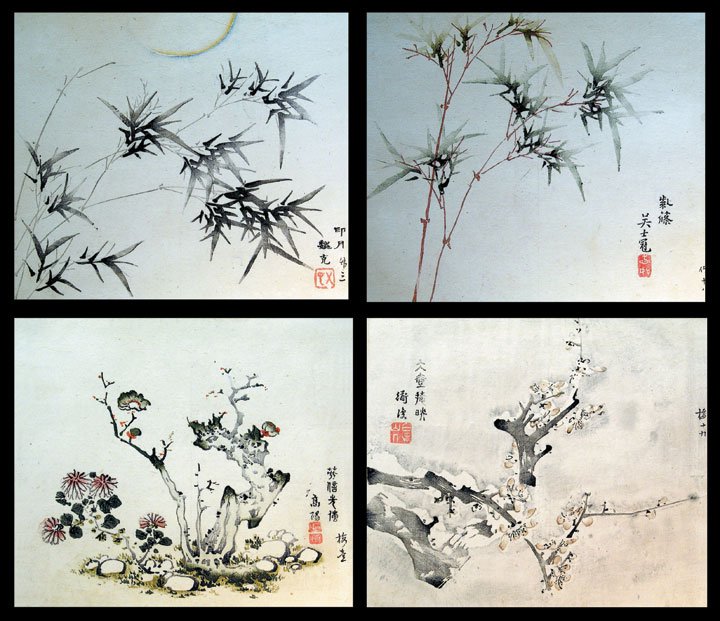 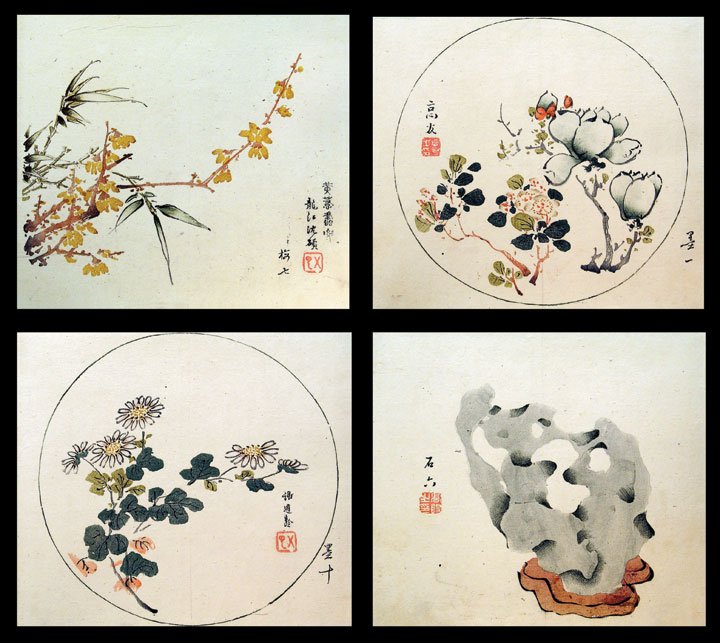 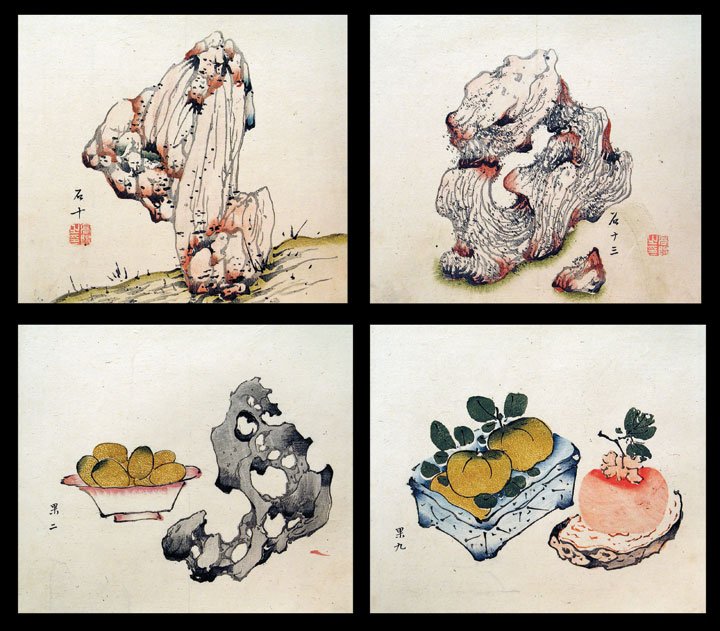 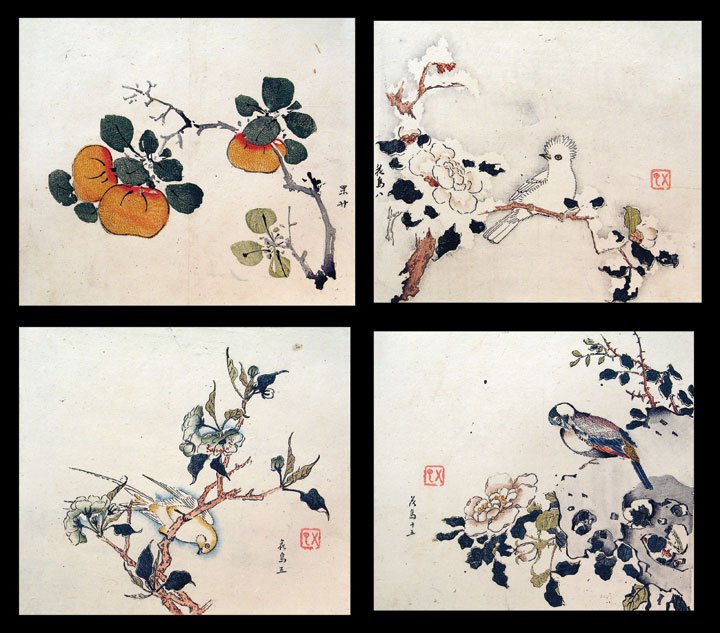