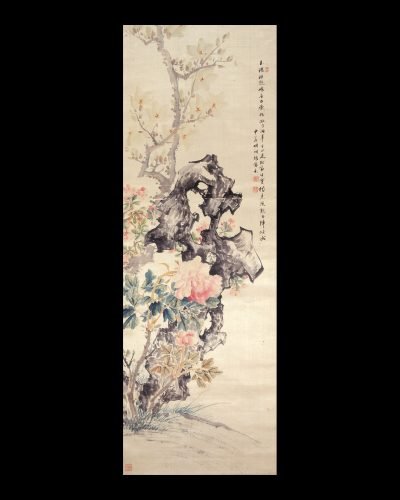 Inscription:
“Waking in light from the jade-circle (moon),
their beauty is without force,
paint and powder are rippled throughout
as though born in the vapors of wine.
If not for Fen (zhou Shanxi) wine
produced in the Treasure Tower,
what would prevent the East Wind
from collapsing the city wall?

Hu Tiemei from Zhonghua (China) here followed his own ideas.”

Box inscription:
by Naotaka from Bizen in Okayama prefecture

The peculiar rock with its jagged inky edges and irregular perforations and contour presents a monochromatic anchor and foil for the blossoming plants with their soft washes of pastel colors, washes of pinks and greens perfectly sufficient to capture the nature of the lovely plants. The images, however, are more than reflections of the physical nature and beauty of these flowers. Each has symbolic import in the mind of the Chinese ranging from wealth to nobility and perfection to great female beauty to the romantic, gut-wrenching despair of absent love. Combining the autumnal begonia with the early spring magnolia, and spring to summer peony is a manifestation of artistic license that Chinese painters wielded freely and not infrequently.

Although Hu Zhang’s birth was registered in Anhui, and some of his seals proclaim him “A son of Yaozheng” or Jiande, he seems to have lived for a considerable period of time in Yangzhou, where even today the local museum houses a good number of his paintings. Both his father and grandfather were painters and the grandfather also a poet and calligrapher of some note. And while both appear to have travelled locally, Zhang broke family tradition by setting sail for Japan in 1878. He might have had a companion in Wang Yin (ca.1829-1892 or later), the two artists both regarded as followers of Wang Shishen’s (1686-1759) style of painting blossoming plums. Wang Yin, in fact, was said to excel in painting thin blossoms and called himself Yemei or “Nanjing Plum-blossom,” while Hu Zhang, noted for portraying quite luxuriant blossoms, called himself Tiemei or “Iron Plum-blossom.” Living first in Nagoya and later in Kobe, Hu Zhang married a Japanese woman and became fast friends with a number of influential artists and scholars before returning to Shanghai in 1886.

Hu’s growing reputation in artistic circles in his homeland is attested to by his contributions to the new edition of the Mustard Seed Garden Painting Manual issued in 1887-1888.1 Greatly impressed by the momentous changes occurring in Japan during the early Meiji era, Hu in 1896 founded a newspaper, the Subao, presumably in an attempt to foster comparable change at home and, further, established the Guxiang Studio for Fans and Stationery. Neither enterprise was fruitful, which might have given him reason, along with involvement in the reform movement of Kang Yuwei in 1898, to return to Japan, where his wife soon passed away and in 1899 Hu himself died and was buried near Kobe.

The present painting, although undated by inscription, was done in Japan, and thus most likely dates between 1878 and 1886, during his first sojourn there.