The painting is in full accord with the inscription, which records a visit made by the artist to Mount Wu (figs. 1-2). In the bottom of the picture visitors approach the entrance gate, beyond which a path ascends to near the summit. Several travellers appear on the path, a few on the verge of passing through Dragon Gate, the two monoliths each several tens of feet in height. The mountain path ends at the Lotus Blossom Grotto where another structure guards the entrance to the cave, the most wonderful sight, according to the artist, at Mount Wu. The physiognomy of the mountain is indeed extraordinary, as was averred by the painter, and here he did full justice to the scene. Although not dated by inscription, the Ching-i-t’ang seal appearing here was associated with the artist’s house in Shang-sha that he occupied after the year 1663.

The brushwork identifies the artist as a follower of the orthodox school of painting stemming from Tung Yuan in the 10th century and augmented by Chao Meng-fu and the Four Great Masters during the Yuan dynasty. This tradition was continued during the Ming dynasty in Suchou by Shen Chou and Wen Cheng-ming, and it was this latterly segment of the tradition that formed the basis of the artistic education of our artist, Hsu Fang (1622-1694), born in Suchou and a near lifetime resident there.

The most complete biography of the artist at present is that by Dean Wickes, reprinted here in part.[1] “Hsu Fang, May 2, 1622-1694, Nov. 7, poet, scholar and landscape painter, was a native of Wu-hsien (Soochow), Kiangsu. His father, Hsu Ch’ien, posthumous name Wen-ching, 1597-1645, a chin-shih of 1628, was made supervisor of instruction at Nanking under the southern Ming regime (1644). But having been dismissed from office for implication in Court intrigues, and unwilling to submit to the restrictions imposed by the Manchus after their conquest of Nanking and Soochow, he ended his life by drowning.

Hsu Fang became a chu-jen at the provincial examination of 1642. Deeply affected by his father’s death three years later, and despondent over the political situation, he spent the remainder of his life in retirement, associating only with a few kindred spirits and members of his immediate family. At first he lived with his brother-in-law, Wu P’ei-yuan (d. 1679), at Lu-hsu near the southern boundary of Kiangsu; later he resided in various places in the hilly country west of Soochow; in 1647 at Chin-shu, in 1659 at Chi-ts’ui, in 1660 at Teng-wei, and in 1661 at T’ien-ch’ih. Finally, in 1663, he owned a house at the village of Shang-sha (or Chien-shang). He lived by his own exertions, and though often in great need, refused to accept gifts. He avoided visits from guests in high position, and made it a rule never to enter the city. Nevertheless, his writings and brush work became well known and it was largely by the sale of these that he managed to support his family.

His writings were voluminous, and although most of them have evidently disappeared, it seems likely that the best are preserved in a collection entitled Chu-i-tang chi in 20 chuan, for which he wrote the preface in 1684 and which was edited by his disciple, P’an Lei…Hsu’s narratives are intimate and poignant portrayals of life as he saw and experienced it.

He had four sons, all of whom died before him…After Hsu Fang’s death the house at Chien-shang where he lived for the last thirty-one years of his life was, through the efforts of P’an Lei, made into a memorial shrine. This shrine was rebuilt in 1809 and again, after a fire, in 1867. In 1933 it was still standing. Hsu Fang’s younger brother, Hsu K’o (1627-1700), who remained at home in comfortable circumstances, was also a writer, poet, and calligrapher.” 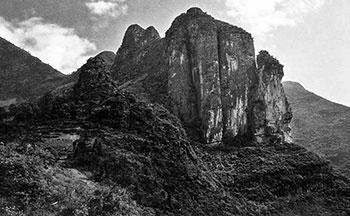 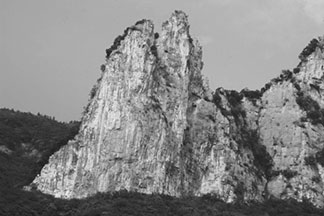