Inscription:
‘During the second month of winter in the year 1683, this was painted by Hsu Chuang from Wu- hsing.’

Artist’s seals:
Yin Chuang (‘seal of Chuang’) and one other

Four ladies sit around a low table, playing cards in a garden setting defined in fore and background by exotic garden rocks. Bamboo, cherry and magnolia trees contribute greatly to the composition, adding structure as well as sheer decorative beauty. The lush setting is further enhanced by color, blue-green for the foreground garden rock, imperial red for the table covering and the carpet on which the ladies sit. Their clothing and elegant postures identify them as ladies of the imperial court, just as their obvious lack of enthusiasm for and interest in the game itself suggests that they are merely passing time in a desultory fashion as they wait for imperial summons and attention.

The subject and the style in which it is presented here were intended to evoke, at a distance, the courtly art of the T’ang dynasty (618-906), when the blue-green style came into popularity and court ladies played important roles in art, literature, and history. A more recent precedent may be found in the works of the great Ming dynasty painter Ch’iu Ying (d. 1552), whose oeuvre includes paintings such as the ‘Peach and Pear Garden’ (fig. 1) of which the present painting almost appears as a detail. Ch’iu also catered to a class perhaps newly wealthy but certainly eager to claim at least aesthetic association with the noble and imperial collectors of the past, and the same motivation may be attributed to the present artist.

Although many today are aware that the Chinese invented gunpowder (and thus fireworks), kites, tatami mats as a floor covering, the tea-ceremony, and even sumo wrestling, their invention of cards and card playing is less widely known. Known at least from the late T’ang onwards, and associated then especially with royal courts, playing cards were found thoughout Asia by the 11th century and in Europe by the late 14th century. An European painting done some decades earlier than the present work demonstrates the greatly increased tension attendant on the introduction of money and betting to what in the Chinese version is merely a way to while away time (fig. 2).

Hsu Chuang is not recorded in standard biographical sources but his extant paintings indicate a span of activity between 1683 and 1704. He was thus too late to be recorded in the Tu- hui Pao-chien Hsu-tsuan of around 1680 and a bit too early to be included by Chang Keng in his Kuo-ch’ao Hua-cheng lu of 1735. The inscription here indicates that he was resident in Wu-hsing, near Hangchou in Chekiang province. Other extant paintings by Hsu include an album leaf of ‘Drinking Tea’ dated to 1701 in the Fogg Art Museum (fig. 3), [1] and a painting of a ‘Court Beauty, after Chou Fang’ dated to 1704, in the Hosokawa collection in Japan (fig. 4). Hsu was thus one of the commercial artists who catered to the Ch’ing market for, to use James Cahill’s title o f his important book on the subject, Paintings for Use and Pleasure.[2] Cahill was the first to identify, describe, and analyze this category of painting, most usually ignored by both Chinese and Western critics and art-historians because the artists were often either minor or unknown, and the subjects were far distant from the literati-style landscapes most appreciated at that time. A near-contemporary of Hsu was Ku Chien-lung (1606-88 or later), a commercial artist who worked in Suchou (fig. 5) as well as in Peking as a court artist serving the K’ang-hsi emperor. As paintings within this category continue to surface, and their aesthetic and art-historical value recognized, it is clear that Cahill, once again, has fashioned a new way of regarding and confronting the heretofore monolithic block of traditional Chinese criticism and evaluation.

1. I am very grateful to Dr. Robert Mowry for his gracious willingness to find and identify this painting in the holdings of his museum.

2. James Cahill: Paintings for Use and Pleasure, Berkeley, 2010. An exhibition entitled ‘Beauty Revealed: Images of Women in Qing Dynasty Chinese Painting’ based on Cahill’s perceptions and findings will appear in 2013 at the Berkeley Art Museum, curated by Dr. Julia M. White, Senior Curator for Asian Art at the museum.
∙∙∙∙∙∙∙∙∙∙ 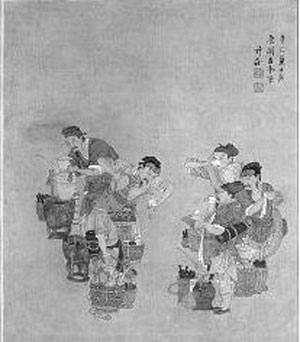