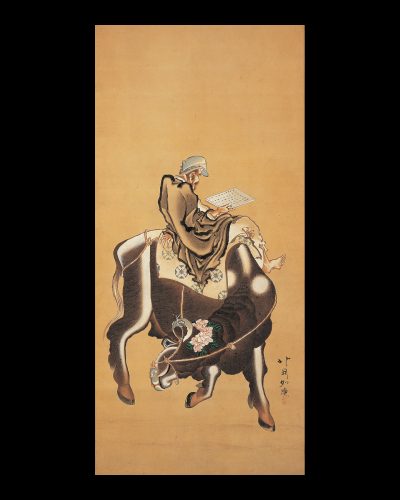 A black ox with white markings and wearing a crown of flowers twists its head down and sharply to one side, leaving only one eye and horn visible, the other out of sight below. A pin through the ox’s nose connects with the rein by which he is guided. A decorated blanket on the creature’s back is attached by straps running around his stomach and over his hindquarters, and this provides a comfortable seat for a figure who reclines while reading a tablet. This man, with bare feet, short beard and mustache, wears a scholar’s robe and hat and appears deep in thought, paing no heed to the progress of his vehicle.

This figure can be identified as the Chinese philosopher Laozi (b. 604 B.C.), generally regarded as the founder of the Daoist school of thought. Late in life Laozi is said to have traveled to the west; on reaching the Hangu Pass, Governor Yin Xi begged the master to leave behind some guide for humanity, whereupon Laozi produced his Daodejing before continuing his journey and disappearing forever.

The scene portrayed here thus shows Laozi pondering the words of his text, the very writing of which would seem to contradict his dictum that “Those who know do not speak, those who speak do not know.” The steady progress of the ox without human guidance, on the other hand, may be held to manifest another idea of Laozi’s, the wondrous doctrine of Inaction: “Do nothing, and all things will yet be accomplished.”

Hokutei was a direct disciple of the great artist Katsushika Hokusai (1760-1849). Judging by the assured line and the decorative impact of the present work, Hokutei may have assisted Hokusai in the creation of some of his marvelous sets of prints. Hokutei here demonstrates that he also studied more subtle aspects of his master’s art, the need for inventive and compelling treatments of standard themes as well as technical dexterity in their execution.