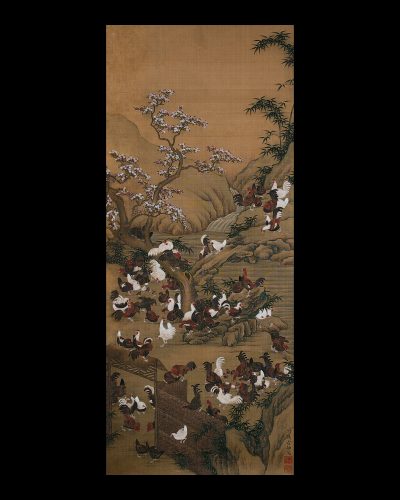 Inscription:
“Painted by Jakuyu of Nagasaki.”

Within an environment defined by a farmyard fence, rocks, a blossoming peach tree, river, and bamboo appear one hundred chickens.1 Their color, sex, orientations, and activities are greatly varied, creating much visual and narrative interest. The verisimilitude and brushwork suggest knowledge of Chinese styles, and the artist, Hirashima Jakuyu, was born and worked in the southern city of Nagasaki, a pupil of Yamamoto Jakurin.

The practice of painting one hundred examples of anything—children, horses, cranes, deer—began in China, where the number carried auspicious connotations of “all” or “every.” Thus, for example, Ito Jakuchu (1716-1800), Jakuyu’s predecessor, painted a charming picture of “One Hundred Dogs” (fig. 1).2 Chickens were prized in ancient China, not only as an item on the menu but also as possessing “five virtues”: the comb its civil virtue; the calcar behind the claw enhanced its fighting powers, suggesting military virtue; the will to fight against an enemy was its virtue of courage; inviting its fellows when food was available was its virtue of benevolence; and not forgetting to announce the break of day was its virtue of constancy or trustworthiness. Paper-cut images of the rooster were pasted on windows during the Spring Festival, the first day of which was called the “day of the chicken.” Peach wood would be carved into images of immortals on New Year’s Day, put at the gate, and then the feathers of roosters would be inserted to symbolize the chicken. When the peach wood immortals were replaced in time by New Year’s couplets, the use of rooster’s feathers was replaced by pasting rooster paper cut-outs on the window.

1. Mary Ann Rogers, who is suspicious of all such formulations, and therefore counts everything, could not find that exact number of birds in the painting.

2. There are in fact only fifty-nine puppies in the painting.