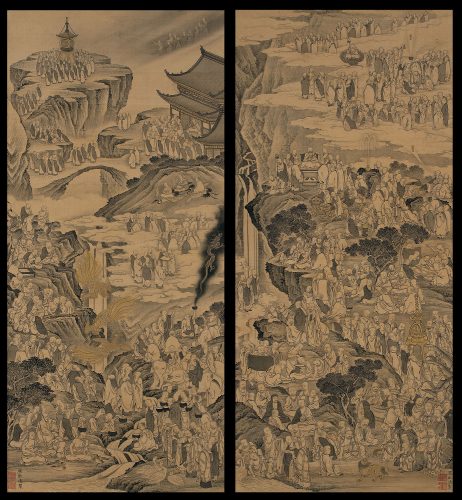 ‘The Five Hundred Arhats at T’ien-t’ai’

Inscription on each painting: ‘Made by Zaichu.’

Arhats (a Sanskrit term rendered in Chinese as Lohan and in Japanese as Rakan) originated in the personal disciples of Shakyamuni. The group consisted originally of sixteen figures, recorded in China during the 7th century, but this was expanded first to eighteen and ultimately to five hundred, the better to serve in temples as exemplars and guardians of the faith. Early images, such as those attributed to Kuan-hsiu of the 10th century (fig. 1), were engraved in stone and also circulated in later copies, including one set by Wu Pin of the late Ming era (fig. 2). The group of five hundred arhats appears in literature already during the T’ang dynasty and was given striking visual form in a set of one hundred paintings produced by Chou Chi-ch’ang and Lin T’ing-kuei between 1178 and 1188 (fig. 3). This Southern Sung painting is more complex in composition than the classic images of the 10th century but is naturalistic in approach, at least in comparison to a late Ming handscroll by Wu Pin (fig. 4).

The present pair of paintings manifests a conservative style, one that pays homage to the past while yet contributing to the extension of the received tradition into the future. The compositions are complex, with numerous figures and animals organized in admirable fashion. In the left-hand painting geese and ducks grace the banks of a stream with arhats feeding them or washing their eating bowls. Just above other arhats ride elephants. The middle ground is occupied by arhats riding lions and playing chess while to their right rise three phoenixes and a dragon, perhaps symbolizing imperial approval of the activities. Another group of monks ride clouds and intone scriptures just below three arhats riding on cranes. The upper portion of the painting is given over to a representation of the rock-bridge at T’ien- t’ai, a version based on the site itself (fig. 5), across which monks move to approach a lecture hall or to ascend for worship at a pagoda above.

A stupa also appears in the foreground of the right-hand scroll, just above a scene in which monks write on the leaves of banana palms and others wash their clothes in the stream below. In the middle ground arhats mend their garments, signifying the frugality of their monastic lives, while others meditate, drink tea, ride lions and listen to lectures. Monks reading sutras, praying, and worshipping occupy the upper portion of the painting, which is visually unified with its mate by the parallelism of waterfalls and by middle ground figure groups standing on clouds. The whole is striking evidence of the technical expertise of the artist, who was clearly a master of painting figures as well as organizing them in very complex compositions.

Hara Chien (1750-1837), go Zaichu, was born and worked throughout his life in Kyoto, becoming one of the most important artists of his day. Studying first with Ishida Yutei (1721-86) and Maruyama Okyo (1733-95), Zaichu also learned from the Tosa school as well as from later Chinese paintings then in Japan. From these disparate influences Zaichu fashioned a personal style of much force and originality, such that he is credited with having formed his own influential school in Kyoto. Many of the followers of the Hara school were also family members, beginning with Zaichu’s sons Zaisei (d. 1810) and Zaimei (1778-1844), and continuing with Zaimei’s son Zaisho (1813-1871). With the exception of Zaisei,[1] who died very young, probably about the age of thirty- five, the other members of the Hara school all did wall-paintings and contributed to the decoration of the Kyoto Imperial Palace when that was rebuilt in the early 19th century. 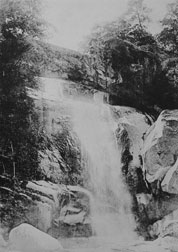