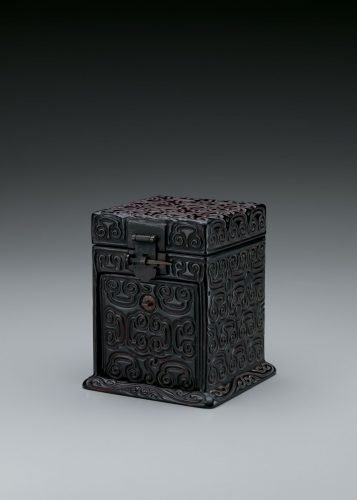 This small chest is of square section raised on a splayed foot surrounding a countersunk base with a detachable front panel fitted with a tiny metal tab-shaped pull on a circular mount. The panel conceals four drawers of square section, each fitted with a small leather pull. The cover is mounted with a metal lock held by a nail and on the back two dovetail hinges are attached with ten minute nails. A removable square tray fits beneath the lid and is covered in black lacquer, as is the base of the chest. The walls, lid, and drawer fronts are covered overall with multiple layers of lacquer, red alternating with black, the thick lacquer deeply carved to create a decorative pattern comprised of ruyi “wish-granting” scepter head forms and related elements. On top of the chest the ruyi radiate symmetrically from a sunken cross-motif in the center, the ruyi interspersed with four circlets equidistantly placed, and the sides of the lid carved with upright ruyi forms, two in the front flanking the lock and three each on the sides and back. On each side three large flat bosses are arranged in a triangle in the ruyi pattern. The front panel is similarly carved but without the circles. Each drawer front is decorated with a pair of confronting C-shaped motifs, simplified from the ruyi forms, the leather tabs set between the two C-shapes of each pair. The slanted foot is carved with sinuous scrolls symmetrically arranged on each side. The motifs were formed by cutting diagonally through the lacquer, rounded in the depressions, and flattened on the uppermost surfaces, producing a marbelled red and black relief, with the surfaces polished.

The deep carving of lacquer to produce bold designs in high relief, a specialty of Chinese artisans from the Song period (A.D. 960-1279) onward, was made possible by the application of multiple layers of lacquer to create a thick covering over the substratum, usually wood, the layers characteristically of two or more alternating colors. Such carved layered lacquer is known as tixi, “carved rhinoceros,” or xipi, “rhinoceros skin,” Chinese terms that are in use but somewhat misleading since the rhinoceros per se had nothing to do with this lacquer style.1 In Japanese such lacquer is known as guri, “bent circle [whirligig; scroll].” Guri is a more accurately descriptive term for the bold geometric designs based on a single distinctive unit repeated to fill the available space. The compositions are tightly, rigidly and highly organized usually in a symmetrical formation and notable for their sense of horror vacui.2

The unit is a tri-lobed form which is sometimes described as a sword-pommel pattern or a pommel scroll but is also an avatar of the ubiquitous Chinese ruyi, “wish granting,” form, most naturally comprising the heads of wish-granting scepters and further associated with the magic fungus. This motif can be rendered as organic or naturalistic at one extreme or stylized and even eccentric on the other. These motifs are often seen in Chinese art as transformed and floating in the sky as detached clouds or cloud banks or four of them linked and draped over the shoulder as a “cloud collar” or aligned one next to each other to form decorative bands or borders or becoming medallions or panels to contain further designs or as purely ornamental overall geometric patterns, as they are in the lacquer here.

Metal ware from datable Song dynasty contexts represents what was probably the stimulus for the guri lacquer deep-carving style and the characteristic repeat motif, as, for example, a silver bottle and a silver box, both excavated from Southern Song period tombs (figs. 1-2). On the other hand, it would appear that ceramics in guri style were inspired by the lacquer, which has normally been the case historically (fig. 3). Although the plump trefoils on the carved stoneware bottle from Fujian are very similar to those on the sides of the lid of the present carved lacquer box, and although the carving style is similar, there is an absence of color layering or marbling in such ceramics.3 In fact, when one hears the Chinese or Japanese terms for such lacquer, what first and foremost comes to mind are the distinctive motifs organized in distinctive compositions, secondly the deep carving style, and finally, if at all, the color layering. For this reason “guri-style” is a term casually used when describing Jizhou ceramics or white wares from Fujian that are painted or molded with the characteristic lacquer pattern.

The guri style was a very conservative one. Technical details, however, suggest roughly when a piece was likely produced. The early style is represented by the lacquers datable in general from the Song through Yuan dynasty (A .D. 1279-1368). They were produced with multiple colors—yellow or green added to a red and black palette, or yellow serving as the base or ground for alternating red and black. This is exemplified by two lacquer pieces from a Southern Song period tomb (figs. 4-5) and by another in the Minneapolis Museum of Art (fig. 6). However, from the early Ming period (1368-1644) the palette was limited to red and black (figs 7-10). Further, the early wares are distinguished by the application of a greater number of layers and thinner ones than in later examples in which the red might be reduced to no more than two or three layers and the red and black both applied more thickly. The color contrasts are therefore subtler in the early pieces and more pronounced in the later. Finally, the way the lacquer is carved can be an indication of general period of production. In the earlier lacquers sharp V-shaped depressions or troughs and high peaks produce an overall sculptural appearance. This is in contrast to the rounded U-shaped troughs and a compression or flattening of the upper surface in the later lacquers.
Despite such guidelines, however, the dating of such lacquer ware is not an easy deal, as a perusal of many a book and catalogue east and west alike will indicate. Sherman Lee, in a groundbreaking book on the art of the Mongols, co-authored with Wai Kam-ho, the two among our heroes in the field of Asian art, experienced as he was writing about these lacquers an uncharacteristic moment of uncertainty expressed in a single word: “In all of these, hopefully, Yuan examples…”4 That really says it all.
Style aside, there is a bit more. The form of the chest, regardless of its origin, was a handy storage container for seals, and perhaps other writing paraphernalia. This is the use to which such boxes were put in China and Korea, and also in Japan where numerous examples still exist and where the present chest was acquired (figs. 11-12).

2. George Kuwayama describes guri as “… sculpted scroll patterns arranged geometrically. Guri are simple spirals compounded into a complex pattern of curving and counter curving scrolls, or into concentric rows of repeated sword-pommel patterns. It is an enduring theme in Chinese art, arresting in its geometric order and understated beauty.” George Kuwayama “Chinese Guri Lacquer,” in Urushi: Proceedings of the Urushi Study Group, June 10-27, 1985, Tokyo, p. 13. Sir Harry Garner notes: “The term guri has been applied to a group of carved lacquer in which alternate layers of different colour are used to provide a decorative feature. Generally the design is of scrolls, either of the so-called ‘classic scroll’ type or of cloud collar motives (the well-known ju-i heads)…The term is of Japanese origin and is used in its original sense to describe a scroll or whirligig pattern. In its ordinary use it has no reference to layers of different colour…” See Sir Harry Garner, “Guri Lacquer of the Ming Dynasty,” in Transactions of the Oriental Ceramic Society,” vol. 31, London, 1957-1959, p. 61. 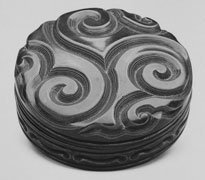 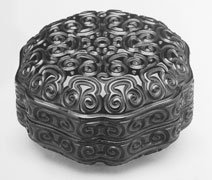 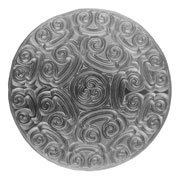 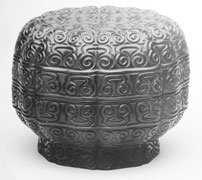 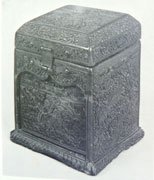 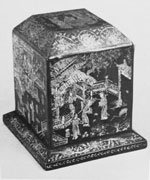